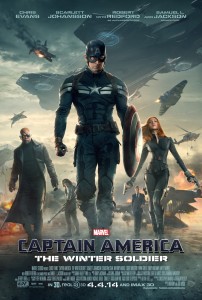 The plot is entirely unoriginal.  I have heard it compared to the video game Metal Gear Solid 2: Sons of Liberty.  But it also might be said to borrow from Star Trek: Insurrection and the Bourne series (with the theme of government corruption), Minority Report and the Terminator series (with “precrimes” and drones like “Skynet”), and Robocop (the “Winter Soldier” being much like the cyborg Robocop).  And that is not even to mention the plot holes.  Why exactly are the bad guys doing what they are doing?  And how did they get the money to do it?  And why do they drop hints for Captain America to use to uncover their plot?  Anyway, it isn’t any of those things that make this movie fun.  It is that the fight scenes require a minimum of suspension of disbelief and are intense, well choreographed, tautly paced, and impeccably executed.  Plus, the good guys are actually trying to do good, which is not always the case with superhero movies.  Like some of the recent Iron Man films, this is better than most superhero garbage.