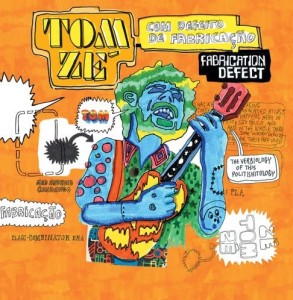 When it comes to the work of Tom Zé, the most common comparisons from the English-speaking rock/pop music realm are Tom Waits (from the 1980s) or Captain Beefheart.  But the premise of Fabrication Defect, a concept album about the people of the Third World as “androids” having the “defects” and effrontery to “think, dance and dream,” takes its philosophy straight from the likes of the French writer Jean Genet, a lifelong thief who celebrated that role precisely because it was seen as a perversion by an immoral and corrupt social order.  Zé is part prankster, part eccentric visionary, part musical historian.  You won’t find a whole lot of popular music albums from people in their 60s this sharply caustic and irreverent.  But Zé is one of those beautiful oddities who makes his own precedent.  Fabrication Defect has the same wit and blend of high theory and fun gags (with a bit more in the gags department) as his great mid-1970s albums.