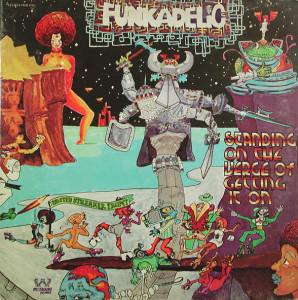 As Funkadelic and Parliament started to diverge, Standing on the Verge of Getting It On is kind of a return to form for guitarist Eddie Hazell.  He dominates some of the best parts of this album, especially the lengthy closer “Good Thoughts, Bad Thoughts” — kind of a sequel to “Maggot Brain.”  “I’ll Stay” is another good one.  Hell, this whole album rocks like only Funkadelic could.  There are heavy grooves, and a heavy commitment to “free love” and whatever remained of the 1960s freak scene.  Of course it all sounds like a psychedelic trip too.  No other band managed the precarious balancing act of holding forth all the black and white musical elements that came so naturally to this group.  As Parliament gained popularity, there would be a lot less chaotic weirdness and more focused grooves, making this something of a last gasp for the offhand, working band qualities that carry much of the album so well.