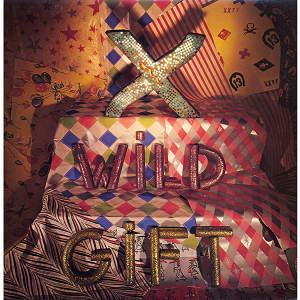 There is something that comes out in people who break the rules. That something can be powerful. It has faded since the time X put out Wild Gift, but it’s still possible to conjure it up while this record is on. All it takes is a spark. When beyond the rules there is a clear shot at freedom, then the rules become, along with youth itself, a fuel for those passionate activities that survive measurements of days, toil and bothers. It’s a precious fuel, which spoils easily with any attempt to store it away. So, the music of Wild Gift isn’t groundwork or penance for something else. It is a fire burning now. Now. NOW! The effects are immediate. The effects are spectacular.

X’s music embodies a lifestyle — a little haggard, a little idyllic — that goes against the norm. Wild Gift sounds less obviously “punk” than its predecessor, Los Angeles. But the same fury is still there, if one cares to notice. What Wild Gift has that Los Angeles doesn’t is the open-minded welcoming of any new genre, hook, or snippet of prose with forward momentum. Occasionally, detours into cha-chas and other novelty dance rhythms (“Adult Books” and “Year 1”) threaten to break the album apart, but always the band pulls together again — help often coming in the form of dependable rockabilly riffs. If Wild Gift, and punk rock in general, have one thing to offer, it’s bringing together the disparate stains of counterculture for a few hotly productive moments, for a serendipitous turning around. The coming together itself isn’t the achievement. It’s what happens after. Total realignment.

Yes, X had conventional musical talent. One of the grand ironies of the great ’77 punk explosion was that bands without musical talent — conventional or otherwise — could put on good shows, but they usually couldn’t make decent records. X could blend humor, heartbreak, desperation, longing, and fervor in a way that doesn’t force its way to the front. The experiences of surviving L.A. are in there. By completely avoiding any prophesizing, X cement their own outlook without a need for justification. Like “Some Other Time” blathers: “we can draw the line some other time.” If nothing else, Wild Gift represents people being people, and realizing that only later.