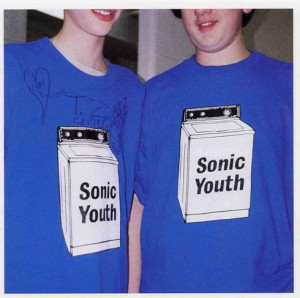 Washing Machine was a turning point for Sonic Youth.  The band had been around for a while, and the early 1990s saw them give way a bit too much to grunge/alternative rock fads, leading to what some consider (perhaps a bit unjustly) their very nadir as recording artists with Experimental Jet Set, Trash, and No Star.  But they re-emerged with Washing Machine chock full of new ideas and began to establish themselves as rock music elders, of sorts.  At least in hindsight that is the reputation this album has earned.  Truthfully, some of the moody atmospherics and slower tempos here were already popping up on Experimental Jet Set, Trash, and No Star in brief, undeveloped snippets.  Here those ideas are expanded to song length.  As a whole, Washing Machine is all over the place, with the fuzzy, washed out psychedelia of “The Diamond Sea” (which paves the way for A Thousand Leaves), a smooth, epic guitar anthem “Washing Machine” (paving the way for Murray Street), a beat poetry monologue “Skip Tracer” (paving the way for NYC Ghosts & Flowers), the skewed indie pop of “Little Trouble Girl” (something they seemed aiming at for a long time but hadn’t perfected until now), plus some noisy and rough guitar rock (looking back to the early 1990s).  It takes the album a while to warm up, because it opens with tepid, grungy numbers that seem almost stuck in the past.  But things pick up quickly.  There are great ideas here.  Yet, it seems like the Youth refined many of these ideas on later efforts that are often unfairly maligned.