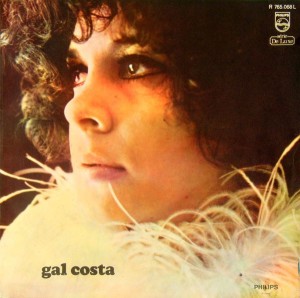 Recorded for the Philips label, there are definite parallels between Gal Costa and the recordings of other Philips artists working elsewhere around the globe — Nina Simone, Scott Walker — plus psychedelic rock akin to The Beatles or even The Monkees circa Headquarters.  Costa’s second album has a more immediately recognizable internationalist flavor though.  She brings together uniquely Brazilian music with that of the UK and USA.  The album is the product of the turbulent times of the late 1960s, when it seemed like there was this force building to topple the corrupt, oppressive forces that ran governments and institutions around most of the globe.  Rather than pushing overt and militant protest music, Costa and her cohorts just sort of assumed that context in a sympathetic way, urging it, yes, and subduing some of their intents, but also adapting to what was happening elsewhere and connecting those things to their own lives.  As part of the Tropicália movement, this was a counterculture, working its way out from a military dictatorship in a South American country on the periphery of the global economy.  What makes the music still sound so fresh decades later is that it really puts effort into adapting so many influences in a way that is not beholden to the specific contexts of any of them.  This was a very modern project, expanding on the (fundamentally christian) idea of universalism (in a secular way) by taking away the oppressive meaning of existing musical symbols and trying to establish a new more open cultural platform where everything is equal.

The album opens with the stupendous “Não identificado” (English translation: “unidentified”).  There is some psychedelic noise in the intro, but then the song adopts a warm walking bass line, briefly features a leisurely organ melody, and builds a cautiously bright string treatment before Gal starts singing a bossa nova melody.  It is a densely layered arrangement, which later on calls back various elements introduced early in the song in new ways, never quite settling into any sort of repetitive verse-chorus-verse template.  The vocals are light, unmistakably Brazilian.  Gal sings with an airy touch without resorting to meek breathiness.  No doubt, arranger Rogério Duprat is a key to the success of the song.  Much like Paul Buckmaster on various projects in the UK and USA, he took a deeply sympathetic approach to his work with Costa.  He had studied with Karlheinz Stockhausen and Pierre Boulez, bringing those modern European classical influences into popular music (just like Buckmaster).  Duprat places different music forms usually segregated by the economic classes of their audiences on a level plane, so that low, high and middlebrow cultures rub shoulders amicably.  It isn’t that he creates meaning through juxtaposition, but that he fosters a scenario in which a new meaning emerges that is not really strictly directed by the coordinates of the constituent elements — it is a crude analogy, but think of a connect-the-dots picture than when completed renders an optical illusion.

Much in the vein of Frantz Fanon and the spirit of the Third World project (from the Bandung Conference to the Non-Aligned Movement), musicians like Duprat sought to overcome colonial subordination and be viewed as equals on an international basis.  From that standpoint, the music of Gal Costa makes perfect sense.  It blends musical styles from around the globe.  And rather than use those varied styles merely for superficially “exotic” effect, there are real, substantive contributions to each of those genres, in a kind of post-Einstein relativist framework that treats each as valid in its own ways.  Unlike music that made a complete revolutionary break with what came before, Gal Costa — like other contemporary Tropicália recordings — maps a kind of path from legacies and external music to new international music trends.  This music never doubts its connections to everything from the May 1968 French student uprising to the Summer of Love to the 1968 Democratic National Convention, while facing arguably greater repression from a military dictatorship in Brazil.  They were making an argument for revolution in South American terms, more like the Salvador Allende government in Chile, or the civil part of the Carnation Revolution in Portugal, positing that radical change could happen through the force of peaceful argument.

“Lost in the Paradise” has lyrics in English and a more uptempo soulful groove.  As the song begins, a muted trumpet (or cornet) plays in the style of a Miles Davis & Gil Evans collaboration (Porgy and Bess, Quiet Nights).  The song is followed by “Namorinho de portão,” with fuzzed-out psychedelic guitar — although the backing musicians are uncredited, and aside from the strings and horns, it is likely the band Os Brazões who supported Costa at live shows around this time.

Another highlight is Caetano Veloso‘s “Baby.”  It was kind of a movement standard, though many consider Costa’s the definitive reading.  Here it opens with slow rapping on a wood block, then a guitar strums a few times.  The vast space present between raps on the wood block and the few strums of the guitar make it almost impossible to sense or predict how the song’s rhythms will settle out.  Just as the rhythmic ambiguity threatens to become disconcerting, a drum kit presents a samba-like beat and a string section enters.  The strings play shimmering harmonies in layers, with overlapping washes of sound that move to a new, higher-pitched layer before the last fully resolves.  The impression is of rapid reconfiguration of the basic aims of the song, as if it heads in directions never contemplated when the song opens — just seconds earlier!  Once Gal starts singing a fairly conservative (by comparison) melody that recalls a typical love song, it locates a human constant amid the radical arrangement by Duprat.

Elsewhere on the album, the songs are a little more conventional, if that is a fair characterization.  Some of the horn charts are not too far off from Sérgio Mendes & Brasil ’66, just a little punchier.  Gal’s vocals are always smooth and elegant.  It is easy to look past this album to others of the Tropicália movement with more far-out and funky psychedelic guitar and more electronic and reverb effects.  Yet there is a lot about Gal Costa that is daring.  Gal Costa came to the Tropicálists a bit late, in some ways, and was one of the most conventional singers of that cadre.  Yet it is a testament to the movement that it was open to a singer like Costa, and to her that she could blends in so well with the scene and deliver an album as good as this, and as hard to pigeonhole in any one (or two or three) discrete genres.  For those reasons the themes and intents behind the album are deeply consistent in a way that goes well beyond most such efforts.  Maybe that is why this has remained a kind of watershed recording for so long.