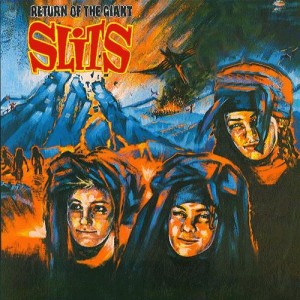 This album — blending African, Asian and other types of folk music into 1980s pop and dub — sounds a bit contrived.  It pales in comparison to the group’s debut and extant radio recording sessions for their original existence.  However, you have to give The Slits credit for being more ambitious than Siouxsie and the Banshees (the closest comparison), Talking Heads, Lizzy Mercier Descloux and a lot of other artists who headed in the same direction in the early 80s, by bringing a larger number of types of folk music into play and combining them in stranger ways.  Still, I don’t think many of these experiments were entirely successful, for The Slits or anyone else except PiL on The Flowers of Romance (not coincidentally, also the name of a band that feed into The Slits), and more often than not these types of albums tend to bore quite quickly.  And yet, this way of looking at the album is also completely wrong.  The band wasn’t really making punk music any longer.  This doesn’t start with punk and add in other flavors.  It starts with world fusion free jazz stuff.  The band was listening to Ornette Coleman‘s Dancing In Your Head and Don Cherry‘s Brown Rice (they toured with Cherry too), plus Sun Ra, and they were also working with the likes of Steve Beresford and Gareth Sager who had interests in experimental music and free jazz.  Those reference points put this album in a whole new light.  If you expect a continuation of the punk/dub hybrid of Cut then this will be a disappointment.  But if you accept that it comes from a very different place — guitarist Viv Albertine described Dancing In Your Head as annoying in a good way — then this won’t make any sense.  This remains somewhat mediocre compared to some of those influences, but it does make more sense with those precedents in mind.

A few notes too about the album and its origins.  The cover is an artist’s rendering of The Slits from a photo taken on tour in Death Valley California (the volcano in the background is a liberal modification of the Death Valley landscape), plus another vacation photo of them in the ocean in the background (possibly the photo originally intended for use as the cover to Cut).  They recorded this album and then shopped it around before CBS agreed to release it.  The record label misprinted the sleeve to say “Giant Return of The Slits” rather than “Return of The Giant Slits” and the band had to fight to get it corrected.  This was actually the band’s third album.  Their second, an untitled release of demos and live recordings on Y Records, tends to be overlooked and is rather had to find — some people forget it existed and mistakenly call Return of the Giant Slits the follow-up to Cut.