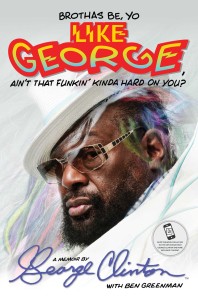 George Clinton With Ben Greenman – Brothas Be, Yo Like George, Ain’t That Funkin’ Kinda Hard on You?: A Memoir (Simon & Schuster 2014)

George Clinton, of Parliament–Funkadelic fame, has written his memoir in the “as told to” format with journalist Ben Greenman.  This gives the book a narrative feel, as if gathered from a series of conversations or recorded monologues.  It’s comparable to other memoirs in that format (Cash: The Autobiography, The Autobiography of Malcolm X).  Fans of Clinton’s music will learn plenty about how his bands evolved.  The accounts of some of his bandmates are a little selective.  Though his friendship with Sly Stone in the 1980s and 90s is rendered well as a sympathetic portrait of another star on a downward slide still trying to forge his own way.  The first parts of the book, recounting his early days in a hard-working touring band and the middle years as part of a colossal musical entertainment empire that evolves into a corporate “organization”, are snappy and engaging like most music memoirs of this sort, while the last part of book covering the later years (tales of old fart funkadelijunkie) are bitter and resentful and a bit less endearing, just like so many of these memoirs that chronicle the autumnal years when few(er) were listening.

Latter-day fans who think of Parliament-Funkdaelic as two sides of the same band may be surprised to learn how differently they evolved, meeting only for a brief window in time.  Funkadelic established itself first, and the band was influenced by psychedelic rock.  Clinton mentions the English rock supergroup Cream as an influence repeatedly, and The Beatles, and Jimi Hendrix.  He had an appreciation for the white British invasion blues-rock bands, applauding their interpretations of black American blues.  He talks about Funkadelic being a very democratic band into the early 1970s.  But he also discusses those days like a businessman, never failing to mention how he watched the charts for ideas, made promotional connections in radio, and worked every angle on commercial terms.  When Parliament takes off in popularity, Clinton jumps at the chance to be the frontman.  He felt that to be really huge a band has to have a focal point.  What he glosses over, though, is what the rest of the band thought about that.  Clinton talks about some of the key members like Eddie Hazel, but others are mentioned more in passing.  He addresses some of the splinter bands led by others with a sense of slightly condescending pity.

If you believe Clinton’s account — and you probably can’t believe all of it — he has been screwed royally on financial matters and he’s cleaned up his life just before writing this book.  Still, he comes across as pretty defensive.  He has a rationale for everything.  Yet he works pretty hard to put those rationales across to the reader, while trying not to let on to those intentions and apologetics.  He is also a bit hypocritical.  He waxes on about how all music is adapted from other music.  And yet, a good portion of this book is a rant about how he’s been ripped off, especially in the hip-hop era when DJs have frequently sampled Parliament-Funkadelic songs.  On one page, he’s praising adaptations of old songs (without payment), on another he’s complaining how he hasn’t been paid for samples.  Now, he makes some good points that sampling royalties shouldn’t be set up as they are, and should instead be proportional to the sales of the sampler.  But his arguments are confused and rather self-serving, ultimately resting on nothing more than his whims and fancies.  Some deserve compensation, and others not, and the two can hardly be told apart without Clinton’s infinite wisdom (read: unlimited discretion).  He mentions the George Harrison/Chiffons copyright lawsuit, and defends the ridiculous outcome.  Yeah, maybe Clinton fell in with some crooked people who haven’t compensated him and pocketed the difference.  He makes that case.  It is a fair argument.  But the idea that anybody at all should be raking in royalties for their efforts of decades before, and that sampling isn’t a fair use that creates no need for royalty payments, have kind of assumed away a big part of the public policy issues.

The most interesting way to look at this book is to set aside Clinton’s own spin and put his hippie ideals into a sharper critical focus.  Sure, he was into free love and all that, though pretty early on he tried to reveal the superficiality of much of the 60s counterculture, in terms of how it failed to fundamentally transform society.  But doesn’t that critique apply to him as well?  The book doesn’t go there, but it should have.

Clinton is fast to discard the democratic cooperation of Funkadelic to achieve bigger commercial success with Parliament.  The question of what was surrendered in that process goes largely unexamined, and the assumption that big commercial success is necessarily an achievement superior to purely cultural cachet looms large over the narrative.  He derides those who sought material possessions.  Yet at the same time he talks about how he instead wanted to use his wealth from Parliament’s success to accumulate experiences.  Social scientists have explored how developing “cultural capital” through exclusive experiences and the “nonproductive consumption of time” is just another mode of establishing social distinction, not really opposed to the kind of thinking that gives rise to conspicuous consumption of luxury items.  This is a curious flaw in Clinton’s version of hippie ideals.

He blasts those whose message was about “pointing at a power structure and condemning it as they went about installing themselves at the head of a new one.”  But again, his pleas for credit (and remuneration) for his past achievements kind of seek to locate himself at a particular position in popular musical history, which is to say in a hierarchy.  When discussing a Funkadelic reunion project that required large payments to Bootsy Collins and Bernie Worrell, Clinton complains about how they wanted to be reinstated as co-leaders and acted like stars, lording that status over the long-time (yet non-famous) members of his working band.  Who decided that Clinton gets to make these calls?  Hasn’t the audience, for better or worse, decided that they want to hear Bernie and Bootsy more than the members of Clinton’s latter-day working band?  Isn’t that really why Clinton recruited Bernie and Bootsy back in the first place?  There is a tacit assumption that in spite of what the audience thinks he gets to be the center of the operation and, like a CEO, slot everyone else in the band into their “proper” place.  Sound very hippie-like to you?  Or were hippies always short-sighted capitalists at heart, evidenced by the way they later gave into the “me generation” and vapid 1980s Reaganomics materialism?  Don’t expect Clinton to pause long on these questions, because he doesn’t.

No doubt, Clinton has made some great music in his long career.  But was his autobiography published only because of his musical talent or did his relentless ability to self-promote have more to do with it?  The man admits some faults and mistakes, for sure, but those admissions are limited mostly to things he feels like he has since resolved.  The demons he hasn’t bested still lurk in the shadows, and those shadows seep into the pages of this book more than Clinton probably intended.  It is good to have this available as Clinton’s side of the story, but there are other perspectives that need to be explored to understand the Parliament-Funkadelic legacy.