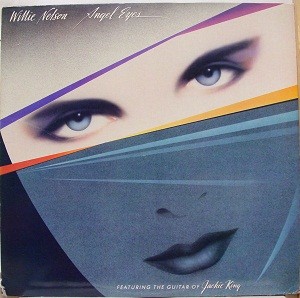 In the 1980s, Willie Nelson released a lot of albums.  So many that most are forgotten.  Angel Eyes from 1984 was recorded at his own Pedernales studio and pairs him with a jazz combo led by guitarist Jackie King (who receives special billing on the album jacket).  Ray Charles does a guest vocal.  King and his band play a rather straightforward post-bop music.  King had connections to a lot of country artists.  His style is akin to Barney Kessel, Kenny Burrell, or even Jim Hall, with a very clean tone and little inclination to play chords. Willie sticks almost exclusively to vocals.  He is a competent jazz vocalist (and guitarist, as collaborations with Wynton Marsalis attest, though you wouldn’t know from this recording).  He would go on to record many jazz albums.  Here, his performances are nice but not particularly compelling.  This is less of a snooze-fest than Willie’s easy listening and light pop albums of the era (Stardust, City of New Orleans) but it is also not ambitious enough to garner much attention.  Yet Nelson fans should perhaps give this a bit more credit than it has tended to receive, because it has a much more authentic and intimate improvisational feel than certain others of Nelson’s forays into jazz.  This belongs in the top half of the large batch of curious but insignificant genre exercises that Nelson has recorded in his long career.