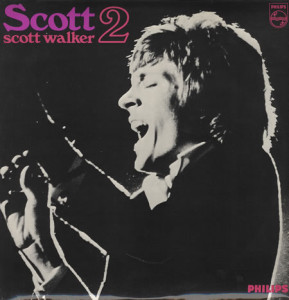 Scott Walker’s records were never exactly subtle.  They always had an unmistakably direct quality to them, but they could also have a stunning depth and complexity that wasn’t as immediately apparent.  His second solo effort Scott 2 is the most direct and straightforward of his 1960s output.  It does, however, come up a bit short on depth at times.  That isn’t to say it isn’t commendable.  His grandiose rendition of Tim Hardin‘s “Black Sheep Boy” is a triumph.  He was writing more originals, which, although often too blunt in execution here, primed those talents for the smashing artistic success of his next two efforts.  I know that many consider this their favorite Scott Walker album.  For me, it’s just a bit too brash and overconfident.  The novelty of his left-field crooner shtick had worn a bit.  He started to coast a little merely on what passes for edgy subject matter, without always offering a unique vision of it.  Scott 2 was a popular album no doubt, his highest charting solo album (#1 in the UK).  But F. Scott Fitzgerald in The Beautiful and Damned wrote how “the type of man who attains commercial success seldom knows how or why, and,…when he ascribes reasons, the reasons are generally inaccurate and absurd.”  Fortunately, perhaps, Walker didn’t seem to understand his commercial success, for he betrayed those elements many times in his career to produce something more than commercial.  Did anyone really think it was his hauntingly personal musical vision moving albums off the shelves anyway?