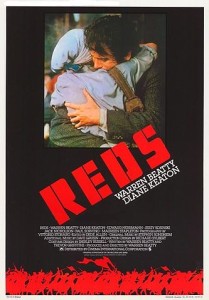 Although there is frequently an accusation of “Hollywood Liberalism,” after the McCarthy witch hunts of the 1950s, the political left had a fairly low profile in Hollywood after WWII.  During the “New Hollywood” movement, beginning in the late 1960s, that changed, somewhat.  In the early 1980s, at the tail end of that movement, there were at least a couple of politically leftist epics — no less — that represented some of the last and best examples of what was possible for the political left working in conjunction with big business movie making (the other being Heaven’s Gate (1980)).

Reds is the biographical story of John “Jack” Reed (Warren Beatty), the journalist and author of Ten Days That Shook the World (1919), an account of the October (Bolshevik) Revolution in Russia, and his companion Louise Bryant (Diane Keaton).  Reed is the only American buried in Red Square in Moscow.  The film opens at the beginning of WWI.  One of the finest moments in the entire film comes in the first few scenes when Reed, a journalist just returned from the front in Europe, is asked to speak at a high society gathering about the real cause of the war.  He stands up and says, “Profit.”  He then immediately sits back down.  Could there be a clearer explanation in any number of words?  Interspersed with the historical dramatizations are documentary interviews with “witnesses,” people who knew Reed and Bryant long ago retelling anecdotes for Reds.  Some were friends, while others don’t have anything particularly kind to say.  Jack Nicholson portrays playwright Eugene O’Neill.  His misanthropic character has clearly been a model for plenty of other Hollywood actors in later films.

Many leftists despise Reds, often because it subordinates the October Revolution to a romantic melodrama.  This seems unfair.  If the romantic drama were not in the forefront, this would not be a Hollywood movie.  As it is, there are hardly any Hollywood films that paint authentic leftist revolutionary activity in such a positive light.  Of course, Michael Cimino‘s Heaven’s Gate overcomes all the difficulties with Reds‘ treatment of romantic melodrama (Kris Kristofferson ends the movie married and bored on a yacht) — though at the same time Cimino’s film was butchered to a condensed version that bombed, only to be resurrected with a director’s cut later on.

It is difficult to maintain a suitable pacing throughout an epic.  Reds does well in that regard, even if things slow a bit toward the end when during the midst of the post-revolution civil war the film, paradoxically, focuses on the powerlessness of the characters.  There are bits of Ten Days That Shook the World that might have added some levity, like when the only restaurant open after Reed investigates the storming of the Winter Palace is a vegetarian restaurant called “I Eat No One” with a picture of Leo Tolstoy in the front window.  But, such changes would, again, make this something other than a Hollywood romance film.

As it stands, Reds is one of Hollywood’s finest dramas of the early 1980s.  Beatty and Keaton are fantastic, Keaton as someone from a privileged background desperately striving to cultivate cultural capital in the artistic/journalistic world and Beatty as the slightly vain and adventurous but nonetheless immensely talented figure who made important contributions to the historical documentation of the October Revolution in the English language.