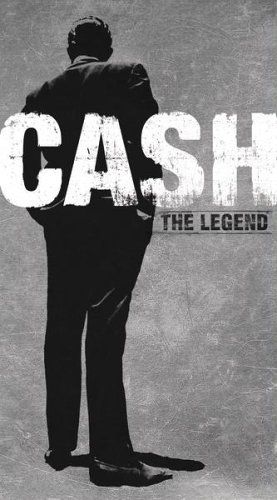 A very nice though still imperfect set covering many sides of the Man in Black’s career.  There are plenty of opportunities to take in that inimitable voice.  This would make a very good introduction for a newcomer.  But let me comment on a few of the benefits and drawbacks of this particular collection.  On the plus side, there is a lot of fantastic material here, including just about all of Cash’s most essential cuts.  This boxed set is long enough to accomplish that feat.  The last disc features only collaborations and selections of other artists’ recordings where Cash guested, which is nice in bringing you to things like a selection from Bob Dylan‘s Nashville Skyline album and other things that might not otherwise come to your attention, even though it is the weakest of the four discs here.  There are some curious choices and glaring omissions — notably, nothing with Cash’s daughter Rosanne (their duet of “September When It Comes” would have been a better choice than the version with The Nitty Gritty Dirt Band).  Scattered here and there, especially on disc three, there are also a select few recordings that originally went unreleased, like the gem “Goodnight Irene”.  As for the drawbacks, on the other hand, I could quibble about a few song choices and exclusions, which tend toward rather conservative picks.   There aren’t too many epiphanies here for those familiar with Johnny Cash’s catalog, so there is nothing like “Happiness Is You,” “Orphan of the Road,” “The Folk Singer,” “Sugartime” or “Blistered” thrown in to surprise you.  Aside from a few minor gospel albums, Cash recorded for just four record labels: Sun, Columbia, Mercury and American.  The Sun, Columbia and Mercury recordings are the ones represented here. His Mercury recordings aren’t well liked critically or commercially, so their sparse representation here is probably appropriate, though again there are no surprise inclusions of great tunes like “The Hobo Song” from the Mercury years.  There is nothing at all included from Cash’s American Recordings comeback.  While the American Recordings material is sometimes overvalued by listeners who weren’t alive during the early part of Cash’s career, there is important material contained in it.  So, the lack of any American Recordings material is a big drawback, if for no other reason than it leaves the uninitiated wondering what Cash’s comeback was all about.  It probably also bears mentioning that some posthumously-discovered recordings from Personal File are some of the best things he ever recorded (!), and, while as a practical matter those weren’t available in time for inclusion on this set, in retrospect they can been seen as something necessary for that elusive “perfect” Cash collection that as of yet does not exist. The same might go for other posthumous archival releases like Out Among the Stars.  Lastly, the “thematic” arrangement of material across the discs is kind of a drawback, with a few commercially popular but artistically mediocre songs sprinkled ineffectively across the set.  In spite of all that, this still may be the best Johnny Cash boxed set available.  (See also Traveling These Roads Between Heaven & Hell: Johnny Cash, Singer of Songs).