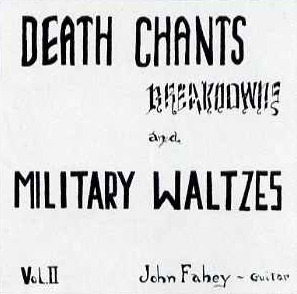 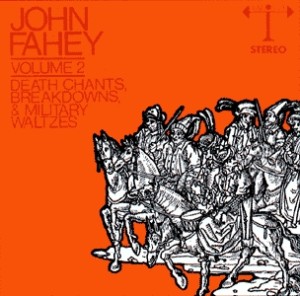 A good choice for an introduction to John Fahey.  He recorded two versions of the album, which features songs on the more straightforward side of his repertoire when he was still expressing things that fall more or less within the realm of the traditional musics from which the underlying stylistic elements originate.  A 1998 CD collection presents the two different versions of Death Chants, Breakdowns and Military Waltzes.  Fahey’s technique on the 1967 re-recording of the original album is far crisper, and the recording quality is imminently superior so you hear everything in greater detail.  The second time around he managed to improve on some songs in the relatively weak middle section of the original 1963 album (“On the Beach at Waikiki”, “Spanish Dance”, “John Henry Variations” and “Take a Look at That Baby”).  Then again, his performances of “Some Summer Day” and “When Springtime Comes Again” are arguably superior on the original version, and the different versions of the album didn’t include all the same songs, so it’s nice to have both complete versions of the album collected on one CD.  If you find yourself drawn to some of the more unusual elements detectable in each song, then proceed to Fahey’s more challenging stuff like Volume 6: Days Have Gone By and The Voice of the Turtle.  If you simply like the impressive guitar technique and the nice songwriting, then try other Fahey releases like The Transfiguration of Blind Joe Death and Vol 3 Dance of Death & Other Plantation Favorites or something from Fahey acolytes like Leo Kottke.