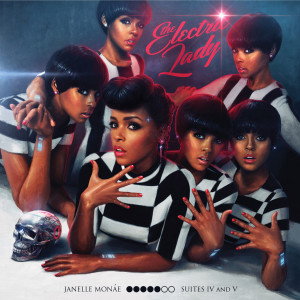 If The ArchAndroid seemed almost claustrophobically overproduced at times, then The Electric Lady goes in the other direction and risks being underproduced and underdeveloped.  But no matter.  For me, this is Monáe at her most likeable and sublime.  By this point, the R&B/soul saga of the android character Cindi Mayweather, chronicled in all of Monáe’s recordings, continues, long after it seemed like the story would come to an end.  Her first EP indicated four circles on the cover image, with one-and-a-half filled in to represent that it was the first installment and the others hollow to indicate what was to come, the full-length début had just one hollow, but now, suddenly there are seven circles, with two left hollow.  This is like some Hollywood movie franchise that suddenly conjures up a few “prequels” to keep itself lumbering along.  Yet, if movie analogies are appropriate, this album seems most like an Oliver Stone film: literate, well-informed, incisive, yet a little preachy and always just over the top with drama.  But the music is maybe a bit, er, a lot cheerier than typical Stone fare.  The album’s heart is its fondness for the past and desire to avoid losing what was valuable in it against the crush of modern corruptions (just like a Stone film).  Monáe clearly has a love of 1970s and 80s soul and rock, from Stevie Wonder to Prince to Os Mutantes (she name-drops them in the liner notes!), to, well, you name it.  So, if this is less ambitious than her last effort, on the surface, it also has a more solid footing in a broad continuum of music that is at once open-minded and engaged with music/culture that is less open-minded — as a positive challenge to the dominance of the latter, refusing to sit idly by.  It is great to hear music looking to make a world that isn’t ruled by fear, and that recognizes that there are precedents for such thinking already out there that provide a kind of strength for subtle but necessary battles of the present.  After a few years of listening, this still holds up really well.