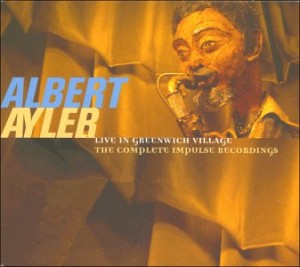 A compilation of Albert Ayler in Greenwich Village and The Village Concerts plus one track from the comp The New Wave in Jazz and one previously unreleased track, all of which were recorded in the same timeframe of 1965-67.  I guess this set is pretty uneven.  It gained a sort of inflated reputation because it came along when practically none of Ayler’s recordings were available on CD — something that has since changed considerably.  When I say uneven, I’m talking primarily of Ayler’s band.  Ayler himself is in quite good form throughout.  However his brother Donald is lagging most of the time, the violin (Michel Samson) is out of place as well.  Sunny Murray and Beaver Harris can’t be heard all that well on drums amongst so many other players.  But despite all that, this still manages to be a pretty good set when everything clicks.  “Omega is the Alpha” is probably my favorite Ayler recording.