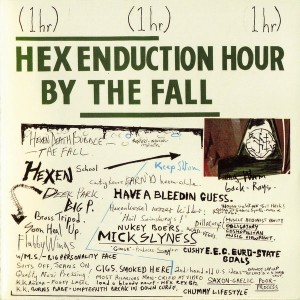 If there is one Fall album that rises above a number of other really great ones, it is Hex Enduction Hour.  This came somewhat at the tail end of the early period, when they were still abrasive as hell.  The sound draws heavily from Jamaican deejay music, like Big Youth‘s Natty Cultural Dread, of all things.  There is a relentless throbbing bass line, and steady drums.  Mark E. Smith doesn’t exactly sing on top.  It’s more of a sustained, shouting rant.  Structurally, this is a lot like what the Jamaican deejays did with dub tracks.  But the similarities are mostly structural.  Craig Scanlon‘s guitar is something else entirely.  It breaks in with a cutting, shattering, noisy sound.  The rather primitive synthesizers do the same.  The band mostly just jabs at the keyboard with blocks of dissonant sounds.  Everything vamps over and again, with little melody.  This draws some further influence from krautrock bands like CAN.

“The Classical” opens the album on a high note.  It is one of The Fall’s most memorable songs. It is a rant that just gets angrier and crazier.  The instrument that gets the most space to roam is the drum kit — something that seems to anticipate the “math rock” genre.  But the nearly eight minute “Hip Priest” matches the opener, with a slow bass line and faint tapping from the drums, M.E.S. drawls on and on sarcastically about a vaguely angry unappreciated loner (with allusions to rock critics).  It is one of the most well-known Fall songs thanks to its use later on in a popular thriller/horror movie.  “Fortress/Deer Park” settles into a great groove.  There are two pulsing chords played on the keyboard that just see-saw back and forth.  Even though they are just two chords, there is a forward movement implied in the rhythm simply by holding each chord for different lengths of time.  The groove keeps rolling on the two parts of “Winter.”  Songs like “Just Step S’ways” and “Jawbone and the Air-Rifle” are catchy too.  Some of the only clear melodic statements on the entire album are found in the single-note keyboarding bridging the two parts of “Winter” and the repeating guitar line of “Just Step S’ways.”

This is music that is intelligent without ever adopting the voice of the powerful.  In other words, this is music that comes from the proletariat, freed from the sorts of things (education, religion, etc.) that bind people to the hierarchies of power.  It comes from the bottom.  Just like the band’s debut album Live at the Witch Trials, the title Hex Enduction Hour implies a kind of revolt coming from outcasts and the persecuted minority.  That point is driven home on the songs “Mere Pseud Mag. Ed.” and “Hip Priest” that rail against music journalists that hold sway over a working rock band.  This is kind of an anarchic impulse.  That Fall pull it off better than most of the bands of the day that were more explicitly “anarcho-punk” in political orientation.  The rhythmic consensus on a Fall record makes the music more organized than the freewheeling mess that so many anarcho-punk recordings seem to devolve into.

What made The Fall so great, and this album in particular, is that it takes what seems like a rather simple formula and proves it to be much more flexible, nuanced and enduring than anyone would have guessed.  It is a testament to concept having a greater role than complexity of execution.  They find ways to adopt catchy riffs and beats though the most rudimentary means, while contrasting those elements with a tremendous effort put towards the sorts of things that many other rock groups would have excised.  There is room here for stranger, less controlled expression.  In many ways the crushing rhythms and occasional melodies set up the wacky bursts and plunks of keyboard noise and the scratchy, distorted guitar chords.  Sometimes it fails.  “Who Makes the Nazis?” has an interesting lyrical premise, extending the concept of “the banality of evil,” but the song falters due to a most tedious bass line that repeats across the entire song.  But mostly, it succeeds.

In a lot of ways, The Fall represented a lot of the best of what the punk movement put forward.  This is inclusive music, drawing from all over the place.  Yet it also put forward its own standards and eschewed what was considered proper.  There was no “professionalism” here.  But there is cleverness, and there is heart.  This music rallies its supporters.  It finds the people who were meant to hear it.  Hex Enduction Hour belongs on the short list of 1980s rock achievements.