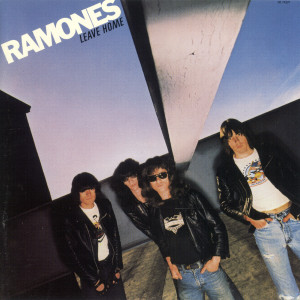 Leave home is a weak spot in the Ramones 1970s discography.  It has “Swallow My Pride”, but lots of the songwriting is fairly weak.  The band was also still saddled with production values that didn’t quite fit.  They were being treated as a neo girl group, and no more.  The thoroughly modern pace of the music that I think could never have been appreciated in decades previous was not always being given credit.

The 2001 Rhino reissue features essentially an entire album worth of bonus tracks in the form of a 1976 concert recorded in Hollywood.  It’s the bonus tracks that eclipse the album proper.  They prove all the legends true.  Johnny really was something of a guitarist, and back in ’76 his style was fresh.  The producers on the early studio stuff just didn’t get how he played guitar, and up until the group’s masterpiece Rocket to Russia they tended to hem him in to rigid rhythms and a tone without much bite.  Live, the guitar and bass could cut loose.  Johnny could just rag on his guitar with abandon.  Guitar distortion takes control of the music.  And Johnny does it all without a single goddamn guitar solo.  However, if I had to put my finger on it I would say it’s that guitar sound that gives this live recording a subtext that the studio material was often denied.  The pulse is relentless too.  The backbeat just never gives up.  It’s one song after another, with a frenetic energy that carries everything along.  Take even the slower-tempo “Havana Affair” where they drag one riff over another to keep the song trudging along.  The band is in sync with the audience, and that translates perfectly to the recording.  Joey‘s voice cuts out on the mic occasionally, but who cares.  The songs are mostly from the first album, which is a plus, and even weaker material like “53rd & 3rd” sounds fine.  “California Sun”, the cover song that is one of only three songs from these live bonus tracks that would end up on Leave Home, is vastly superior live.  The music can breathe, with the rhythm shifting to keep the pace just right.  The music is totally in the moment.  Yet there is nothing complicated about it.  They took all the most basic elements of pop music and attacked them ferociously in a way that would never make sense put down on paper.  The Ramones are The Ramones because they made this kind of music in its rawest, purest form.  It’s loud and fast and catchy.  It’ll knock you over.  It doesn’t give you a second to second-guess any of it.  Yeah, it’s rock and roll!