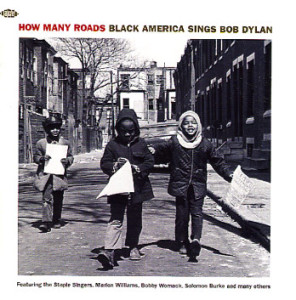 Bob Dylan biographer Howard Sounes made the claim that black America was largely unaware of Dylan.  The compilation How Many Roads: Black America Sings Bob Dylan seems intended to disprove Sounes’ statement.  Yet, in the end, it probably lends support to Sounes’s position.  Most of these tracks are soul and R&B covers, particularly from the 1960s and 70s (though tracks are from as recent as 1990).  But a careful examination shows many of these to be B-sides and filler album tracks.  In other words, it often feels like some of these artists are covering Dylan not out of a sense of connection, but perhaps to garner crossover appeal to white audiences.  Of course, there are exceptions.  Solomon Burke does a kick-ass rendition of “Maggie’s Farm” with a lot of guts.  But probably the highlight here is a stunning a cappella doo-wop rendition of “The Man in Me” by the one-and-only Persuasions (who released an entire album of Dylan covers, Knockin’ on Bob’s Door).