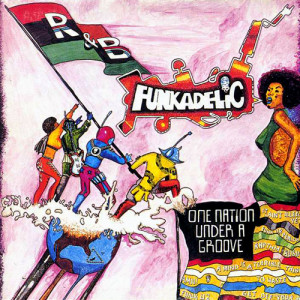 Landing on major label Warner Bros., Funkadelic combined the more accessible elements of Parliament (the funk version of the band) and Funkadelic (the rock version of the band) to arrive at the sound of One Nation Under a Groove.  The edges have been rounded off some of the rock guitar solos, and the funk is a little less hard — you don’t HAVE to dance, but you still very well could.  Things glide by pretty comfortably though.  This is definitely shooting for the widest possible audience.  So, sure, this is probably the easiest entry point.  But at the same time, this falls short of the crazy (and I mean CRAIZEE) unique, grooving, classic music the band made elsewhere.  But you could more readily play this for some squares you know (yeah, you know some) and they would be less likely to shit their pants listening to this one than some others.