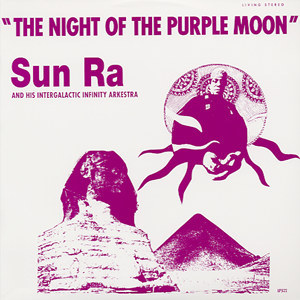 Not the greatest entry in the Sun Ra catalog, but an intriguing one.  Backed by a small combo, “The Night of the Purple Moon” is interesting in how Sun Ra’s own keyboard playing is up front.  Let’s face it, most Arkestra albums feature a lot of great performances from many different quarters, making it seem a bit silly to focus in too much on any one performer.  This album avoids that altogether by stripping down the raw numbers a bit so that Ra is clearly heard.  John Gilmore predominantly plays drums instead of sax, which may be a disappointment to some listeners, but he’s at least adequate as a drummer.  There are a few tracks that meander, but also some particularly good ones.  What stands out most in Sun Ra’s playing is how he navigates the limitations of the rather primitive keyboards he uses.  Some of his instruments don’t provide much in the way of dynamic range.  To get around that, he plunks and jabs the keys in ways that hold little intrinsic melodic or harmonic interest, but add rhythmic subtlety that subverts the flat dynamics.  In many ways, he’s using his skills as a good arranger to structure his own solos.

Another reviewer already said it, but it bears repeating.  Sometimes, for a particular mood, only Sun Ra will do.  “The Night of the Purple Moon” is the perfect album for a certain frame of mind, like on a mellow Saturday night.