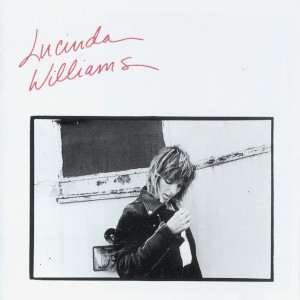 Lucinda was a key voice in the emergence of what would be called insurgent or alt(ernative) country.  What separate this kind of country from others was, above all, the affinity for a less working class, more urban audience.  It metastasized through the influence from the rock world.  Lucinda Williams was released on a record label associated with what was then known as college rock, whose biggest act, well, ever, was the jangle-pop post-punk outfit The Smiths.  The connection between these audiences is immediately apparent in the jangle rock trappings of the album’s single, “Passionate Kisses,” which sounds only a half step away from an R.E.M. hit.  But it’s also there on the opener “I Just Want to See You So Bad,” which has organ backing and some thin, icy guitar riffs that resemble vaguely Elvis Costello.  She’s name-checking the gritty urban modern rock of The Velvet Underground in the liner notes too.  But Lucinda still sings with a clear and light yet sturdy southern twang — her voice here is smoother, more athletic and nimble (not unlike Sheryl Crow) than the grittier, coarser instrument it became years later.  Among everything brought to bear on the album, the country roots are still a dominant force.  In the slower patches (“Big Red Sun Blues,” “Am I Too Blue”) there are echoes of what Emmylou Harris was doing in the 1980s, though with considerably more bite (Emmylou was dreadfully boring then).  The biggest feature is that Lucinda embodies the Texas strain of country music, not (underlined) the Nashville establishment.  This was the sort path leading from Austin, TX that Willie Nelson beat out years earlier (albeit to New York City rather than L.A.).  She was doing something similar, but with a host of new influences.

Lyrically, Lucinda is really great at bringing out a female perspective.  These aren’t the usual songs about some guy chasing after girls who frankly would prefer the protagonist wouldn’t, Lucinda sings about turning away and shedding the burdens brought on by male companions.  So we have “Changed the Locks” (“I changed the lock on my front door / So you can’t see me anymore”), “Side of the Road” (“I wanna know you’re there, but I wanna be alone / If only for a minute or two”) and so on.  But even if some of these share some of characteristics of the “guy breaking away from social bonds” theme of so much music in the late 1970s and early 1980s, that perspective is totally re-contextualized coming from a woman.  Of course, that isn’t all we get.  She’s also singing about longing (“I Just Wanted to See You so Bad”), ambition (“The Night’s Too Long”), growth (“Crescent City”), and all the other flotsam and jetsam or everyday life.  People like to say her songs seem lived in.  That’s about right.

For all its highlights (“Passionate Kisses,” “Side of the Road,” “Changed the Locks”), Lucinda Williams still has its misfires.  There is plenty of filler and quite a few songs that seem to speak to an audience that isn’t around anymore.  Some of these performances plod along, and on the receiving end it feels like being stuck listening to somebody speaking at a microphone who is slowing down the tempo of the room to the point that everyone has to come to a halt and listen, rather than continue on with their lives and absorb the words into ones now richer for the experience.  Nothing is bad, exactly, but some of this seems to overstay its welcome.

This was still a jolt to the notion that country music wouldn’t or couldn’t appeal to the generation of disaffected urban youths listening to rock music who came up after the punk explosion.  The influence?  It echoed long after this album.  Leading insurgent Country magazine No Depression‘s “artist of the decade” in the 1990s, Alejandro Escovedo, was cribbing bits of this more than a decade later (he borrowed guitar licks from “Like a Rose” for “Follow You Down” on A Man Under the Influence and her “Crescent City” seems to be imbued in his “I Was Drunk” from Bourbonitis Blues).  Just like with the aforementioned Mr. Willie Nelson, Lucinda made it seem like a lot of different strains of music could coalesce into something that seemed unlike the specifics of any of the sources.  Part of that appeal was to the vanity of the audience, distinguishing themselves as being above the fray of parochial musical genre boundaries.  But, again, Lucinda was doing much more than offering that kind of flattery.  Her music was reflective, even pensive, taking the time to inhabit its worlds and actually embody its contours in subtle detail rather than just describe its themes from without, in a period when a lot of music was done in high contrast, without any shades of gray.  If this was a little shaky at times, aside from its rather magnificent highlights, Lucinda still had much more to come.