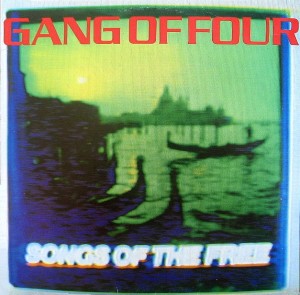 I don’t really buy into the usual story about Gang of Four—that Entertainment! was a classic, Solid Gold was almost as good, and the rest was more or less sellout garbage.  No sir, I don’t agree with that view at all.  Granted, Entertainment! is a classic.  Solid Gold, though, is mighty uneven.  At its best, it is as good as anything on Entertainment! or elsewhere; the worst songs kind of drag, unfortunately, so I always have a hankering to skip past a few.  Certainly, things changed with Songs of the Free.  Only three original members remained, and there was definitely something more “pop” (or “new wave”) in the band’s sound.  This, in and of itself, means nothing.  Fans who demand that the group operate stuck in one gear, churning out the same funk-punk melange forever have unfairly pigeonholed the band.  If that’s what you expect, you will be disappointed here, just as folky Tim Buckley fans were probably disappointed when he put out the funky rock of Greetings from L.A.  But it’s better to grant a band some leeway to explore different areas, especially when dealing with a great band like Gang of Four.  What they do on Songs of the Free in new areas, which included the addition of great female background vocals, is to adopt a more sarcastic and insolent stance that used some of the musical techniques that represented the most repugnant qualities of the era and turn them against their common mainstream purposes.  It may be hard to point to any one song on Songs of the Free and count it among the group’s very best.  But instead of highlights, this album is pretty consistently good throughout.  The follow-up Hard is even more pop-focused, and while definitely unessential, it is still a solid pop album, with two strong opening tracks.  So, anybody listening to U2 albums (War) instead of Gang of Four’s in the early 1980s was probably missing out.