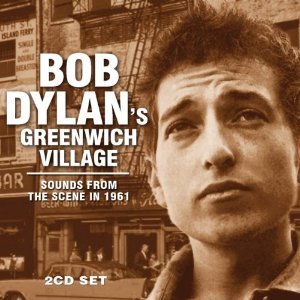 Although it’s become fashionable for certain contrarian Millennials to bash Bob Dylan as “talentless” or make some other snarky comment about him, attempting to position themselves as distinctly beyond whatever he represented, almost anyone with a pulse knows him as one of the major icons of 20th Century pop music.  So, this collection is an attempt to portray the sounds already circulating in his slice of New York City in 1961 when he first arrived fresh-faced from Minnesota and tried to make it as a musician.  There is a lot of music packed into these two discs.  But some themes draw themselves out.  From this evidence, the urban folk revival seemed a lot like an attempt to find authenticity.  It was a break from the big, orchestrated pop and jazz that dominated commercial music of the 1950s.  It had a do-it-yourself quality.  These were much the same impulses that spawned punk rock in the following decade.  Though, in hindsight, many of the white musicians in the movement were, quite frankly, too uptight and inhibited to make really great lasting recordings–punk proved more lasting more often.  Compare some of the afro-american blues represented here, like that from Lonnie Johnson, John Lee Hooker, Lightnin’ Hopkins, and Sonny Terry & Brownie McGhee, there is a stark contrast in authenticity.  So the “new” folkies often failed, but in their failure they took a step in the right direction.  Dylan landed in the middle of all this, and there’s no doubt the ways he took influence.  Indeed, this collection makes a few choice selections of songs that Dylan liberally borrowed from to make his own songs like “Don’t Think Twice, It’s Alright” (“Who’s Gonna Buy You Ribbons (When I’m Gone)”), “Ballad of Hollis Brown” (“Pretty Polly”), and “Restless Farewell” (“The Parting Glass”).  Dylan soared above his influences, at least most of them.  Greenwich Village in the early ’60s was an incubator, but it also had a local, provincial and slightly closeted nature that was as much a limitation as the key to new breakthroughs.  Anyone wanting to understand the roots of Bob Dylan and, maybe more importantly, to understand the cultural catapult that sent him onward an upward to write things like “The Times They are A-Changin’, “Mr. Tambourine Man,” “Tombstone Blues,” “Sad-Eyed Lady of the Lowlands” and all the others will find a treasure trove here.