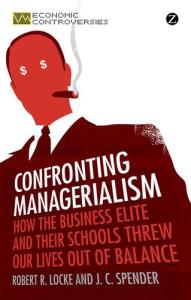 Robert R. Locke and J-C Spender, Confronting Managerialism: How The Business Elite & Their Schools Threw Our Lives Out of Balance (Zed Books, 2011)

Robert Locke and J-C Spender have written a rather excellent book focusing on the history of what they call “managerialism” (a term they adapt from Alfred Vagts‘ concept of “militarism”) in the United States.  Their specific formulation of the concept of “managerialism” is quoted from an earlier article by Locke; it is:

“What occurs when a special group, called management, ensconces itself systematically in an organization and deprives owners and employees of their decision-making power (including distribution of emoluments) — and justifies that takeover on the grounds of the managing group’s education and exclusive possession of codified bodies of knowledge and know-how necessary to the efficient running of the organization.”

Much of the book consists of comparisons of businesses and schools in the United States (plus the UK), Japan and Germany.  What they conclude is that the ideology of short-term, predatory financial gain without regard for a firm or economy as a whole that predominates in the United States is not as prevalent in Japan or Germany.  They find better outcomes, in terms of factors like firm longevity and well-being of workers, outside the United States.  Their strength is a very even-handed tone, backed by ample research.  The cover of the book and the series title “economic controversies” perhaps make this seem like a harsh screed or a sensationalist tract.  No doubt, this is polemic to a point, but the authors largely let history speak for itself, and spend most of their effort pulling together data that tends to be ignored or concealed by business schools.  Nothing about that approach is inflammatory, and their conclusions are extremely moderate (nowhere do the authors suggest abandoning capitalism, for instance).  Ultimately, their conclusion is that business schools in the United States, which don’t exist in the same form elsewhere in the world, have an overall negative effect on business and society, and they think management in U.S. companies should be more inclusive of people with backgrounds in production.  Although they don’t spend many pages advocating any particular system of business management, other than to try to discredit the application of neoliberalism, one detects sympathies for the kinds of Rhineland capitalism of Germany (as Locke has written about elsewhere) or the W. Edwards Deming-inspired, engineering-led “total quality” management approaches of Japan.  They see those other countries as providing better “balance” between competing interests of managers, owners and employees than in the United States.  For that matter, they see the software and computer companies of Silicon Valley in the United States outperforming East Coast businesses.

The book’s rather direct treatment of morality and ethics, as a symptom of business school ideologies, is welcomed.  There is a fairly frank discussion of how much of contemporary business practice has to do with power — who has it and who doesn’t.  Management in the United States acts as a caste that posits they have valuable but still generic “management” skills that uniquely position them to hold a disproportionate amount of power, to the exclusion of workers, etc.  The authors contrast Japan, where management tends to rise through the ranks and have a greater understanding of substantive operations across entire companies.  They carry this analysis over to the ways in which business schools operate, and note how academic “prestige” is a rather direct counterpart to the more purely economic power of businesspeople.  The authors also delineate how religious practices contrast sharply with the types of amoral, ethics-free neoclassical economics adopted by modern American business schools.  They provide intriguing evidence of how religion in America has shifted from ones that emphasized social responsibility and charity to ones (often located in suburbs) with an egotistical focus on the salvation of believers. They also mention the reintroduction of Confucianism to Chinese state capitalism, and resistance of Islamic economics to neoclassical economics.  It is somewhat unclear whether the authors believe religion, either generally or in specific forms, is a countervailing force that can push back against business in a pragmatic sense, or if it even should — more interesting questions since the Catholic Pope Francis started speaking out against unfettered capitalism and inequality in 2013.  This is somewhat of a loose end in the book.

The comparisons being limited to Japan and Germany naturally provides only a limited range of data.  We get nothing from Spain, Brazil, India, Canada, or France, for instance.  It would be informative to take Locke and Spender’s analysis and apply it to other countries, to see how they compare.

As is common with writing of this sort, there are some recommendations at the end.  And as usual, it is possible to accept all the detailed analysis of historical parameters without necessarily accepting the policy recommendations.  Still, Locke and Spender suggest reforms of corporate management structures into discrete supervisory and management levels that require employee participation (as in Germany) and that prevent control of both levels by a single CEO.  They make an intriguing argument there, noting that business schools and business leaders would absolutely fight these things because they would diminish their power.  Yet they also present a compelling basis for why so many other groups, like ordinary workers and absentee shareholders, have aligned interests that might provide a path around the business school trained managers.  Still, in the last few pages they make statements about how no one today is advocating for centrally planned economies.  Really?  (though perhaps this depends on what you interpret “central planning” to mean).  Contemporary evidence from Venezuela, Bolivia, Cuba, even Egypt and Occupy Wall Street might suggest otherwise.  Even just within Germany, a recent poll found that a majority of residents of the former East Germany would prefer to return to communism.  A major publisher also released a book about imagining living in a socialist USA.  While Locke and Spender advocate for flatter, more equal management structures than predominate today in the USA (Spender co-wrote a later book, Strategic Conversations, along those lines), there is a curious lack of evidence as to whether Germany and Japan present any sort of optimal balance in that regard.  The German school system may be better than the United States, but could Germany do even better?  What would a comparison to the worker-owned cooperative Mondragon in Spain add to the discussion, when it potentially has an even flatter organizational structure than is typically found in Germany and Japan? Do the sorts of German employee participation is supervisory roles resemble the kinds used in the former Yugoslavia, which arguably pitted workers against each other? Hasn’t the German works council and co-determination model been exposed as something of an illusion, using Volkswagen as an example?  Or perhaps take this critique:

“Today, the two superpowers, the USA and China, relate more as Capital and Labour.  the USA is turning into a country of managerial planning, banking, services, and so on, while its ‘disappearing working class’ (except for migrant Chicanos and others who work predominantly in the service economy) is reappearing in China, where the majority of US products, from toys to electronic hardware, are manufactured in ideal conditions for capitalist exploitation: no strikes, limited freedom of movement for the workforce, low wages. . . . Far from being simply antagonistic, the relationship between China and the USA is, at the same time, deeply symbiotic.  The irony of history is that China fully deserves the title ‘workers’ state’; it is the state of the working class for American capital.”

The authors don’t really get into the modern practice of using outsourcing to shed responsibility, inscribing discrimination, exploitation and an imbalance of power into the mere existence (but precisely not the explicit terms) of contracting agreements across national borders.

These questions would require a much lengthier book.  It is, however, fair to raise these concerns because the subtitle of this book posits that managerialism “threw our lives out of balance.”  This implies that our lives used to be in balance, or at least that the authors know what a proper balance would look like.  It also raises the question of whether, say, Chinese and East Asian laborers are part of this “us” (“our”).  The pseudo-global perspective of the book does come up a bit short there, fitting the theoretical frame to the author’s geographically-constrained background knowledge — like a tailor fitting a suit to the available cloth regardless of whether the suit fits the wearer.  But, on the other hand, contrary to the book’s provocative subtitle and cover image, the book sets its sights on something rather more specific: proving that — contrary to its claims — U.S. business school managerialism is not optimal on its own terms (they don’t try to quantify how sub-optimal it is).

Suffice it to say, Locke and Spender present convincing evidence that the current organization of business management and business schools in the United States is not optimal.  The current system benefits only management and its academic cohorts.  They obliterate the notion that the system of business management used in the United States is inevitable, or that there is no alternative (TINA).  The authors’ exposition of the issue is as clear as can be hoped, in an area in which obfuscation too often dominates.  Most importantly, they draw out the question of power that is routinely (and, for some, conveniently) ignored in the business world.  They also provide more extensive historical research than most commentators in this area who have drawn similar conclusions.