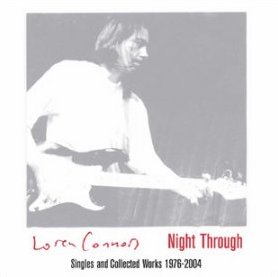 There is something rather amazing about the work of Loren Connors.  To the casual observer, the collection Night Through might seem like nothing more than than home recordings of solo guitar noodling.  But given a fair listen, it becomes apparent from this evidence that Connors achieved something that might seem impossible in his era: a completely unique style of guitar playing.  A blurb by Susan Sontag on the back of a paperback copy of Jean Genet‘s Notre-Dames des Fleurs [Our Lady of the Flowers] proclaims that “Only a handful of twentieth-century writers, such as Kafka and Proust, have as important, as authoritative, as irrevocable a voice and style.”  Connors is a bit like Genet.  His sound is irrevocable.  The work of both masters too is in touch with fringe elements of society, by conscious choice.  With Connors, he is an electric guitarist (mostly) who seems to have bypassed most of the influence of rock and instead drawn inspiration primarily from pre-war acoustic blues and gospel.  His music is quite untouched by identifiable trends in contemporaneous folk, blues, rock or jazz.  It might also be said that there is a resigned acceptance of the categorically un-commercial nature of the music, something inexorably linked to a kind of meager, isolated existence (whether by choice or not).  This, by way of contrast, lends credence to what Petronius revealed in his Satyricon of ancient Roman times that the art of the rich, in its typical grotesque extravagance, is so often intolerable.  In his improvised blues-based songs, Connors uses a wide and lethargic vibrato that is his primary mode of expression (compare “Stimmung“).  Almost everything is slow and sparse, with a dark, haunting, dirge-like quality shot through with the occasional bolt of anthemic consonance.  If ever this music feels crude and frayed, by the mores of the rich at least, it never fails to be anything short of captivating.