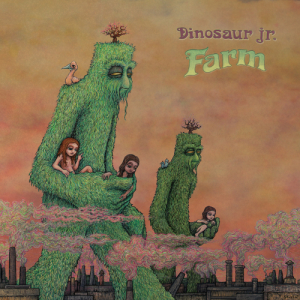 When Beyond reunited the original Mascis–Barlow–Murph Dino Jr. lineup, it was jolt of the best sort of rock energy.  Here were guys well past the usual cut-off for the young person’s rock game pulling off something that hardly seemed to lose a step from an era twenty years prior.  They still were the same screw-ups singing songs that endearingly begged, “please like me,” and “please be my friend.”

Farm takes a turn in a different direction though.  This is a more conventional indie rock album.  The hallmark warbles and fuzzy guitar solos of J. Mascis are held in check within a wall of sound.  Lou Barlow’s bass is unusually prominent.  One song blends into the next, and by the end of the album it’s hard to remember anything about it.  This is the album for people who never liked Dinosaur Jr. to begin with, but want a competent, if rather faceless, guitar rock album to add to the pile of others.  But it is a rather competent faceless guitar album!  The opener, “Pieces,” is the best thing here, though it comes up short of the most memorable of the group’s songs.  Don’t fret though.  The follow-up I Bet on Sky turned things around in a more promising direction, and Mascis’ guitar thundered back to the forefront.