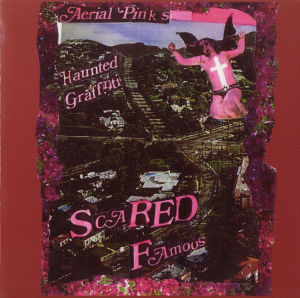 Originally part of a two-cassette, self-released album package Scared Famous/FF>> (2002) recorded in 2000-2001 and available to practically no one it seems, Scared Famous was (re-)released in 2007 in slightly different form.  The liner notes to this later version say it features selections from the original release.  It seems that some songs from both the original Scared Famous and FF>> cassettes are present here (at least based on the song titles), plus some other material apparently not previously released (“Politely Declined,” “An Appeal From Heaven”).  FF>> was re-released in 2010 in what seems to be its original form, overlapping in content with the Scared Famous 2007 re-release.

Let’s look at this music in context.  This is, after all, music that is all about context.  During basically Ariel Pink’s entire lifetime, there has been a retrenchment of power in the hands of the already rich and powerful.  This came at the expense of the middle class (and the poor), undoing the social contract of the New Deal era as complacency set in among the middle classes who forgot about the militancy that forced the concessions that made their “golden age” after WWII possible.  Pink’s music, mostly recorded entirely by himself on rudimentary equipment in his own apartment, but also with guest R. Stevie Moore (their original collaborative activity is omitted from this re-release), in a sense challenges middle class complacency.  In its own way, this music is very militant.  It appropriates musical elements that epitomize the period in which the social transformations that began stripping the middle class of their social status really came forward in an obvious way.  More to the point, this borrows from the sort of music that represented the time when working people enjoyed the highest social standing they ever received in the industrialized world.  This was the music of their glory days, played back when the glory was practically all gone — destroyed.  But since then it all collapsed.  Pink reboots it.

Antonin Artaud wrote an essay, “En finir avec les chefs-d’oeuvre [An End to Masterpieces],” in Le Théâtre et son double [The Theater and Its Double] (1938) — reprinted and translated in Antonin Artaud, Selected Writings (1976).  He advocated for a “theater of cruelty” that had “the power to influence the aspect and formation of things” utilizing physical understanding and trance “as if in a whirlwind of higher forces”.  He was determined to address the power the past held over the future:

“One reason for the asphyxiating atmosphere in which we live without possible escape or recourse — and for which we are all responsible, even the most revolutionary among us — is this respect for what has already been written, formulated, or painted, what has been given form, as if all expression were not finally exhausted and had not reached the point where things must fall apart if they are to begin again.

“The masterpieces of the past are good for the past: they are not good for us.  We have a right to say what has been said and even what has not been said in a way which pertains to us, which is immediate and direct, which corresponds to present modes of feeling, and which everyone will understand.”

David Keenan wrote about “hypnagogic pop” in The Wire magazine (“Hypnagogic Pop,” August 2009, Issue 306).  He coined the term to describe “How James Ferraro, Spencer Clark, Pocahaunted, Emeralds, et al are floating beyond Noise to a dreampop hallucination of the 1980s.” “Hypnagogic” means “Of or relating to the state immediately before falling asleep.” (Oxford Dictionaries).  The way Ariel Pink adopts (and modifies) this approach, it becomes a reflection of the very same sentiment Artaud expressed about the theater seven decades prior.  What has been said and formulated before falls apart, and is put back together in a new way, breaking out of a trance-like impression of the former, accepted meaning.  The flat, creaking falsetto vocals, tape hiss and sudden shifts in tone, and fragmentary lyrics on Scared Famous are like the violent jolts that promote a physical understanding of the music just as Artaud suggested in theater.

What separates the music of Ariel Pink from, say, hip-hop, is that Pink largely retains the overall structure of the sources he plunders.  Hip-hop uses repeated samples, which disassociates the new music from its source.  New rhythms are created.  Raps also use less vocal dynamics than the singing common on the source material.  In contrast, Pink creates songs with verses, choruses and all the other formal elements of the original rock/pop music.  What differs are the jumps between styles and breakdowns within a song, and his vocals, which are irreverent, off-kilter, off-key (flat or sharp), sarcastic, and often in a different style juxtaposed against the musical accompaniment.  So “Talking All of the the Time” has fuzzy heavy metal guitar riffs broken up by squeaky novelty teen pop vocals, shattered by gothic growls.  Also, the degraded, lo-fi haze over everything in Pink’s music has a distancing effect.  It emphasizes remove from the original source, the way late-generation dubbed cassette tapes sound.  Yet it does so inscribed on overt references to the past.  Another way of looking at his music is that it is like being locked in a room in which you have to listen to 1980s FM radio blasted loudly from an adjacent room, with the music sounding indistinct and muddy through a wall, and continuing to the point that it all seems to blend together into a morass of old, jumbled memories.  At that point, someone keeps opening the door to the room to interject statements (in affected, goofy voices) that seem to both contradict and complement the music in a way that makes it seem more concrete and pointed than you previously imagined it could, or ever wanted it to after sitting through it so long.

This is unsentimental, militant music because it does not respect the status of the sorts of cultural artifacts it appropriates.  Pink’s songs pay the sources no deference.  They are just some bits of raw material, the stuff of the past.  History, like these musical fragments, gains meaning only looking back.  Pink has a free hand to fashion whatever meaning in it he chooses.  This is not unlike demolishing an ancient Roman shrine — or if you prefer, a Nazi concentration camp — to use the blocks and rubble to build something entirely different.  And if the only thing built is a flophouse — an apt comparison for some, given the coarse, lo-fi, uncouth sensibility of Pink’s music — so what?  The early Ariel Pink’s Haunted Graffiti albums may seem like bored SoCal adolescent indulgence, but they are also militant in their appropriations.  They must be seen as militant.  Hegel said, “It is an insight of speculative philosophy that Freedom is the sole truth of Spirit.”  (Reason in History).  The caustic, impudent, profane, and at times self-indulgent mess that Ariel Pink has recorded here requires a substantial sort of freedom, or else it would not be tolerated.

What makes Ariel Pink one of the great pop/rock musicians of his time is the scope of his faculty with the remnants of bland pop music of the past.  Some references are easy ones, but they only scratch the surface of what Pink is up to on Scared Famous.  Every song dabbles in slightly different genres, from R&B (“Howling at the Moon”), to psychedelic surf rock/pop (“Jesus Christ Came to Me in a Dream”) to TV commercial jingles (“Beefbud”), Italian pop exotica meeting jangle pop (“Gopacapulco”).  He catalogs a vast array of styles from the 1960s onward.  Some are featured only for a single guitar riff.  Others weave throughout an entire song.  Pink doesn’t just show off his familiarity with so much music, though his work does prove the time and energy he’s put towards such a self-styled education.  The specificity of what he draws upon, both in its time referents, and in the demographics of the audiences that it was directed to and who once fostered its success, make it more than that.  There is a definite act of defiant creativity in the way this slacker takes thrift store cast offs — the music people have wanted to forget — and transposes it to summon meaning that matters to the present.  He is definitely not trying to recreate some closed universe of nostalgic authenticity.  He’s sifting through the wreckage of the past, and taking bits of it down another path.  No doubt, along the way he exudes the sort of attitude that comes naturally from working in record stores and collecting albums (“The List (My Favorite Song)”).

I must admit to a soft spot for autodidacts.  Ariel Pink fits that description.  He’s doing what he does, on his own.  There isn’t deference to norms.  More importantly, he puts forward his own vision, turning the standard hierarchy of taste-making on its head.  If he can turn around perceptions of music like he has here, it seem like anyone can reformulate anything.

Taking, presumably, the best of what was on the original double-album set, this is about as compelling as Pink got with his early work.  No doubt, even this trimmed version of the original Scared Famous/FF>> album set could stand to be trimmed back a little further (dropping “Girl in a Tree,” “The Kitchen Club”).  It still benefits from a sequencing that puts most of the slower, folkier elements in the second half and most of the more driving R&B and metal elements in the first half.  Assuming it is fair to accept the hindsight editing of this re-release, Scared Famous probably edges out Worn Copy as the best of Pink’s early home recordings.