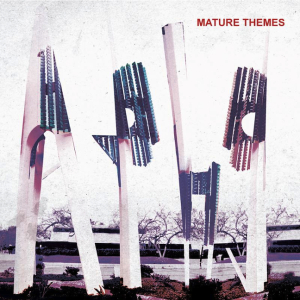 You could say that Ariel Pink’s music is based on some form of corollary to historian Marcus Lee Hansen‘s so-called “Hansen’s Law” about immigrant assimilation (it’s really just a theory): “What the son wishes to forget the grandson wishes to remember.”  That’s because he dredges up material from the 1960s through the 1980s to re-purpose for his own music.  But there is more to his music than just that.  He constantly juxtaposes high and low culture.  This guy has studied pop culture.  On the opener, “Kinski Assassin,” he intones, “who sunk my battleship / I sunk my battleship.”  This recalls a TV commercial from the 1980s for the game “Battleship” in which a kid cries out, “You sunk my battleship!”  But elsewhere in the song Pink is singing, “We’ll always have Paris,” like a line from Casablanca (1942).  Fitting these together, with lines like “Blonde seizure bombshells and the blowjobs of death / Bring on the bog and she-males hopped up on meth” refuse to let this come to any sort of equilibrium.  At times it almost does.  “Only in My Dreams” seems almost like The Byrds.  Then “Farewell American Primitive” references the music collector obsession with “American Primitive” guitarist John Fahey.  But Pink sings, “fuck it, I’m high…”  He also drops in lines like “Native American Immigrant” and “If that isn’t me, North Korea is me.”  In all this, Pink refuses to let his music settle into any sort of comfort zone.  The juxtapositions of the incompatible just keep coming.  This is basically the same approach that the radical elements of the French nouvelle vague movement in cinema pursued half a century earlier.  After all, isn’t the aesthetic that Ariel Pink deploys here almost the same as what Godard did on Filme socialisme (2010), with its oversaturated digital video clips, sudden jumps to different characters, and offhand comments on philosophy, art, and work?

And let’s clear something up.  The term “hypnagogic pop” has been thrown around a lot to describe music like Ariel Pink’s.  But the term is a bit misleading when applied here.  The philosopher Hegel wrote about a concept that became known as “beautiful soul syndrome”, in reference to Goethe’s chapter “Confessions of a Beautiful Soul” in Wilhelm Meisters Lehrjahr [Wilhelm Meister’s Apprenticeship].  Hegel took up Goethe’s story to expand upon it and explain the vacuity in the forgiveness of evil by the “beautiful soul”.  As a J.N. Findlay wrote about Hegel’s Phänomenologie des Geistes [Phenomeology of Spirit]:

“It [the “beautiful soul”] then tries to cultivate goodness in solitary isolation from the actual social whole. *** The very rejection of objectivity is the only achievement of the ‘beautiful soul’, and is held to be the greatest triumph of its self-conscious freedom. It flees from concrete moral action, and luxuriates in a state of self-hypnotized inactivity.”

In this context, the jarring discontinuities of Pink’s music become the key to its success–the reason it avoids “beautiful soul syndrome”.  There is always the threat of a lulled hypnosis, but that is always and consistently disrupted by the strange juxtapositions he invokes, which almost everywhere in the real world are held part.  Mature Themes is maybe less jarring than much of Pink’s prior work.  The violent discontinuities are still there, though, more subtly.  Because they force the listener to confront and reevaluate the elements, they are what keep the album from becoming mere inactive nostalgia for subjective experience.