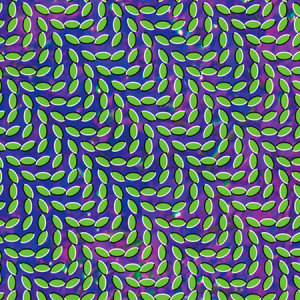 Well, these guys have finally discovered latter-day Flaming Lips influences beyond those of The Beach Boys.  This album is okay, but hardly anything remarkable.  “My Girls” is kinda catchy.  Still, music like this is altogether too contrived and disingenuous to be really good.  Though this kind of music certainly does fit into the larger tend of a whole generation coping with the fact that their parents’ generation (and their grandparents’ generation too) have undermined (and continue to undermine) their chances for the same kind of life or any anything better.  In the usual way, theirs is a kind of retreat into childlike mannerisms.  It’s a generation of self-pity, generally not doing anything constructive to actually get out there and solve these problems, be it out of ignorance, ingrained passivity, a feeling of being overwhelmed, or whatever.  Animal Collective doesn’t quite hit a nerve like the best and most profound musical artists of the era–Joanna Newsom, for one.  Yet what’s interesting about this band is the way they are going back to the pop music of their parents’ generation and trying to rework it, however clumsily.  It’s maybe as Samuel Beckett wrote in Worstward Ho (1983): “Try again.  Fail again.  Fail better.”  By no means is any part of this album better than The Beach Boys.  Yet, maybe with another try it will be.  Just don’t hold your breath.