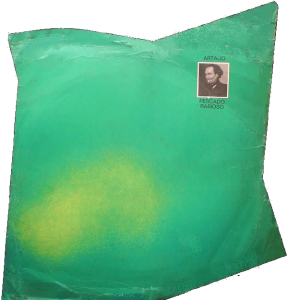 A bit derivative of a lot of folk/rock of the day, like Richie Havens, Neil Young, Tim Buckley, Bread, America, Wishbone Ash, Roy Harper et al., but at its best Artaud offers a compelling distillation of lots of currents running through popular music at the time.  There is a searching quality here.  Argentina had struggled through power battles between military and civilian rulers.  As a peripheral economy, they made fitful efforts to industrialize.  Just the other side of the border in Chile, of course, 1973 saw the U.S.-sponsored coup against President Allende.  Turbulent times.  In them, Luis Alberto Spinetta and Pescado Rabioso (translation: Rabid Fish) attempted to forge an unique identity among the remnants and detritus of Western rock and folk.  They don’t completely break the mold.  They still do manage to forge something of their own.  Some of the most memorable moments (“Las habladurías del mundo,” “Bajan”) have more burning electric guitar solos than much folk of the day.  Spinetta’s guitar playing has hints of forward-looking modernity in its vaguely hippie rock foundations.  The tone of the album is a little darker than what would have been popular in much English-language singer-songwriter music at the time.  It also bears no resemblance to the bright and brash psychedelic and distinctily South American elements of Tropicália that evolved in nearby military-ruled Brazil in the previous few years.  Little touches, like the slightly bluesy and jazzy flair of “Cementerio club” and “Superchería” and the acoustic intimacy of “Por,” keep things interesting.  On the whole this is eclectic.  It’s no surprise then that it’s also a little uneven (the nine-minute-plus “Cantata de puentes amarillos” drags at times).  It’s a hell of a lot more satisfying than a lot of latter-day acts — almost forty years later — like Jack White that also take a highly derivative approach to songcraft, because when it hits this stuff seems honest and thoughtful rather than being just lazy approximations of what are thought to be successfully established formulas.