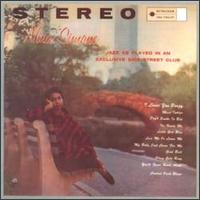 Nina Simone’s debut.  Basically she’s making a Nat “King” Cole Trio album, and only occasionally doing that well.  There’s a sort of smokey vibe to it.  The atmosphere doesn’t quite carry the whole thing though.  There’s really excellent stuff, the vibrant, effortless buoyancy of “My Baby Just Cares for Me”–with Simone embracing the lightness of the song more than she would later in her career–the smooth, lonely grace of “I Loves You Porgy”–where her gently unobtrusive piano accompaniment suits her plaintive vocals–and the stark, harsh, painful solemnity of “Plain Gold Ring”–a tone she would later use many times over with success.  But there are also plenty of really, overextended flashy gimmicks that go beyond Simone’s range, particularly as a pianist (“Mood Indigo,” “Love Me or Leave Me,” “Good Bait”).  The pure instrumental cuts (“Central Park Blues,” “You’ll Never Walk Alone”) drag as rote exercises at best dressed up with touches of stodgy formalism.  It’s as if she tries to insert European classical training directly into a “jazz” setting with the expectation that the mere reference to it adds credibility.  But doing so just seems like pandering to the sorts of audiences who don’t really like “jazz” on its own terms and need reassurance that they are hearing somebody with “real” skills from a different–valid–style.  The poppier stuff (“My Baby Just Cares for Me,” “I Loves You Porgy”) crackles with more vibrancy and confidence.  Simone dives into it, steps out of herself, and treats the material as it deserves to be treated.

This album has more or less continuously remained in print since the 1950s, and is among Simone’s most well-known.  Yet Simone’s most fundamental approach to performance throughout the entirety of her entire career was all about stamping her own personality on her music, and there isn’t so much of that here, for better or worse.  Still, if you chalk up the weakest stuff as “filler” in an era when albums weren’t usually great from start to finish, this compares fairly well to other albums of the day.