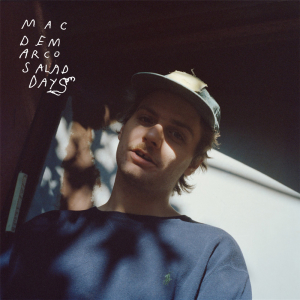 Call it hypnagogic pop, cultural anthropology, or the musical corollary of “Hansen’s law of third-generation return,” there are plenty of musicians operating in the early new century trying to reconfigure the music of the past that was never associated with people their social status before.  Ariel Pink’s Haunted Graffiti spring immediately to mind, but in their own ways, acts like Thundercat and Kishi Bashi have the same sorts of attitudes, even if they utilize arrestingly different styles and techniques.  Mac DeMarco represents sort of the singer-songwriter contingent.  Salad Days has wit and character.  But it also overuses a few gimmicks, like an effect that makes the guitar sound like it is wobbling or maybe even like the strings are rhythmically bending, and many of the songs fail to make their mark.  If you hear one of these songs you’ve practically heard them all–but if you have to choose, pick the title track.  DeMarco has talent and promise.  He’ll just need to work at broadening his range a bit.