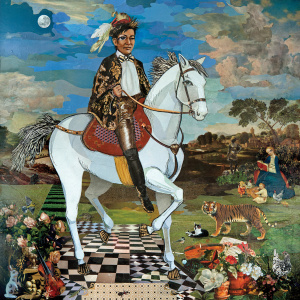 Pop music can still succeed.  Kaoru Ishibashi has made an album here that melds the frenetic energy of Japanese J-Pop with an assortment of Western pop music formats from the last half a century, especially prog rock (Mike Oldfield, Kansas), symphonic psychedelic rock (early Harry Nilsson, The Moody Blues), indie rock (Animal Collective, Edward Sharpe & The Magnetic Zeros, fun., Mercury Rev), etc.  There are a lot of synthesizers here.  They create a symphonic palette on a humbler scale, and without much to be humble about.  It’s something of a surprise that the songs aren’t about elves and fairies, because upbeat, hyperactive music like this is usually drawn to the realm of magical fantasy.  But it isn’t.  That push into another direction is what makes Lighght so nice.  Its strength is its eclecticism, used in a way that is not an end unto itself.  The lyrics have some missteps (“Mr. Steak, you’re Grade A”, *sigh*).  Still, the lyrics are an afterthought to the soundscapes.  The sensation given by many of the songs is that of an idea so intensely developed that it overflows a bit, unable to be contained by the usual structures of the styles it employs.  So, that leads to the limitations.  These songs are sometimes little more than little shots of pop pleasures, synthesizer extravaganzas with slowly building, anthemic vocals rounded out with baroque flourishes on violin and sped-up segments (often from the violin again) once upon a time reserved once upon a time for attempts to sound like chipmunks performing holiday songs.  So enough about the limitations.  A song like “Q&A” has an adept sense of shifting rhythm, built around a fairly steady 4/4 beat, the layers of synthesizer-generated horns, and slippery strings and soft punches of a moog keyboard capture attention away from the beat, so that what is steady has the appearance of something shifting and moving.  This is what Ishibashi does so very well–the insistent drive of “Carry on Phenomenon” has that quality too.  Whatever about the music seems superficial, it more than makes up for in its happy reconstruction of the geekiest sorts of grandiose pop music of the past.  This sources of inspiration often came across as pretentious.  But strung together this densely, Ishibashi puts a sizeable crack in the ponderous self-importance of those influences.  All those influences have a place.  There isn’t any sort of reductionist emphasis on any one of them though.  The techniques of pop music that felt the need to be taken seriously are cleverly subverted this way, by taking away their primacy and centrality.