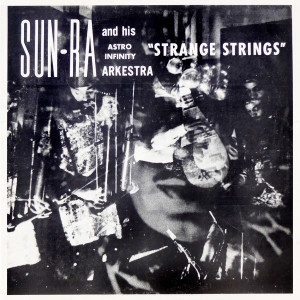 Strange Strings is among the weirdest entries in the Sun Ra catalog.  Biographer John Szwed recounted that Sun Ra gave his musicians recording this some Asian instruments they had never played, a zither-like instrument, and a piece of sheet metal, telling them “You’re playing from ignorance–it’s an exercise in ignorance. We’re going to play what you don’t know and what you don’t know is huge.”  You do have to give Ra some credit not only for making this music and recording it, but releasing it too.  It feels a bit like the reductio ad absurdum of everything underlying the concept of “free jazz”.  In some ways, this record would sound exactly the same if the instruments were given over to a group of small children, monkeys, tax attorneys, ballerinas and bus drivers, who played when Sun Ra pointed at them.  That is both the amazing and frustrating thing about this beast.  Szwed summed it up quite rightly saying, “It can’t hold your attention for 40 minutes but you know you’re hearing something that nobody else would try to do.”  This does have some great moments, if you pay attention, but you really have to work to get at them.  Though you can get the overall effect of Strange Strings a bit more acutely from, say, a John Cage piece.