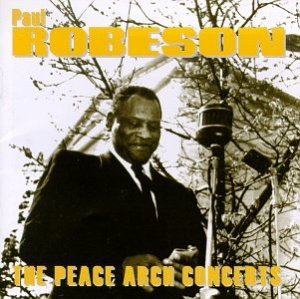 Paul Robeson had his passport revoked by the U.S. State Dept. in the 1950s.  This was illegal, as courts later found.  On top of that, President Truman signed an executive order that prevented him from traveling to Canada.  Normally American citizens could travel to Canada without a passport (* this long-standing practice was ended during the so-called “war on terror” in the 2000s).  The grounds for all this was that Robeson was supposed to be some kind of a threat during wartime.  “Wartime” you ask?  Supposedly, the Korean War.  But there was no declaration of war with respect to Korea, so it wasn’t a “war” as far as the U.S. Government is concerned, so the actions against Robeson were illegal — not to mention completely spurious.

When prevented from traveling to a scheduled concert in Canada, Robeson set up on in a park on U.S. soil, standing feet from the border, and sang for a broadcast across the border.  That was 1952.  He came back again three more times for similar cross-border concerts.  Recordings were made and released by the International Union of Mine, Mill and Smelter Workers.  This comp — released in honor of the 100th anniversary of Robeson’s birth — collects the 1952 and 1953 performances.  The one from ’52 is by far the best of the two.  Though what’s interesting is that not all of the ’52 concert seems to be present here, as I Came to Sing (recorded at that concert) included “Water Boy” which is omitted here.