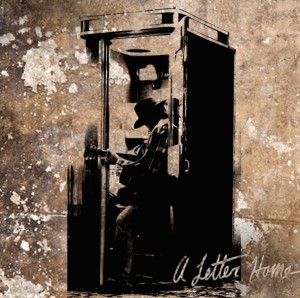 Neil Young has continued to zig and zag in his later career.  That is the best thing about him.  The obvious gimmick of A Letter Home is that it was recorded with an antique amusement park recording booth more than 60 years old, one never intended in the first instance to produce “professional” quality recordings.  With it, Young records an introduction to his deceased mother and then plays songs of famous songwriters he admires–all ones from eras after that of the recording booth.  The equipment provides a way to focus attention on the performances.  The lack of fidelity, the gaps and clicks and pops, they all impress upon the listener that not everything is captured.  The recording is a partial document.  But the vintage equipment doesn’t allow a conscious selection and control of the final product to the degree assumed by contemporary standards.  The creates the possibility for the audience to wonder what it is really about.  At that point, with the audience properly oriented, Young delivers some rather wonderful performances.  Gordon Lightfoot‘s “If You Could Read My Mind” is the least predictable, and best, of them.  Some Willie Nelson songs, particularly “On the Road Again,” fail to impress to the same degree.  At its finest, A Letter Home has Neil Young not on a pedestal, but somebody hacking away with the sort of materials and technological residues available to anyone else, making a mark only so much and so far as his talents alone permit.  IT would seem they can take him quite a way indeed.