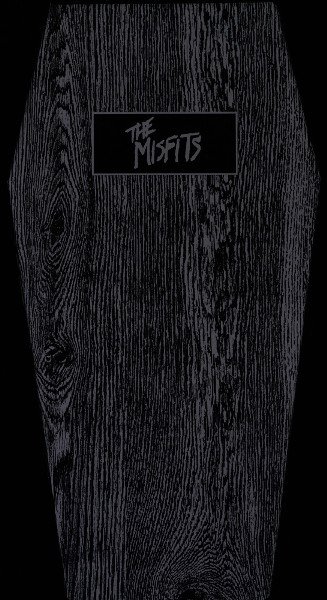 The Misfits.  It’s almost iconic that TV sitcoms and movies are going to show the “rebel” or “delinquent” teenager/adolescent with a Misfits poster in his room, or wearing a Misfits T-shirt.  Yes, watch some old “Saved By the Bell” re-runs to confirm.  Watch David Cross’ cameo in the movie “Men In Black”.  The evidence is there.  For those reasons, I never bothered with The Misfits for a long time, despite the growing number of friends over the years who have loved them tremendously.  When I finally gave them a shot, since my wife had the box set, I could finally hear for myself what it was all about.  And now I love it.

The group’s debut single is a weird and highly forgettable slab of disco-inflected sleaze rock, with a bad recording of a good song on the B-side.  But they hadn’t found a guitarist yet.  Probably around the time they did find their guitarist, or in any event by around 1978-79, they seem to have written the bulk of their classic songs.  They went on to record and re-record these into the early 1980s, with only some of these recordings seeing proper release.  But the song were always there.  They were propulsive, with a strong sense of melody, and a lethargic, pseudo-lazy, slacker’s sense of rhythm.  Even when the lyrics were stupid or adolescent or both, the songwriting still provided great melodies.  The songs also frequently leaned toward catchy sing-along choruses, a good measure of the reason for the group’s continued cult following.

The songwriting might have been irrelevant had The Misfits not had a great singer in Glenn Danzig.  He was the main difference between The Misfits and so many other punk bands.  Other than Nina Hagen, perhaps no other punk singer had his control and range.  Danzig’s vocals are what allowed The Misfits to actually put into practice their developed sense of melody in a way few others could realize, even if they had the inclination.  So the undercurrents of 1960s East coast doo-wop revival are there in the recordings and are convincing enough as to make them easy to overlook.

The gimmick the band had was a fixation on horror movie themes.  The band logo kind of says it all.  Now, The Cramps certainly were also doing something similar.  But where The Cramps focused on divining the countercultural implications of late-night TV and monster movies (at least up through their early 80s record label feud), The Misfits focused on humoring a kind of comic-book horror aesthetic.  A small but noticeable difference.  Funny though, how those two bands that must have seemed the most trivial at the time have held up so much better than so many other gimmick-less punk bands of the day.  If nothing else, and even if you find no substance in the gimmick, the Misfits’ gimmick gave them a common cause to rally around, and tended to unify everything in their recordings.

As for everything else, the sound of The Misfits triggers associations with kind of the basic elements of punk.  Comparisons to The Damned, or any other notable punk band of the late-1970s makes for a fair characterization of the sounds The Misfits’ banged out of their instruments.  After they had exhausted recording their earliest compositions, the well sort-of ran dry, so-to-speak.  They only really wrote a few great songs into the 1980s.  It wasn’t long before their gimmick stopped being a joke, and they seemed to start making it a grave and serious matter.  By the time of the original group’s final full-length album, only their second, they had turned into a rather faceless, unremarkable punk-metal band (and Danzig went on to Samhain, who were that only much much worse).  What happened to drain them of their creativity and originality makes for a good question, and one that I can’t answer.  The group reformed with a series of often high-profile replacement members.  But who cares.  Fortunately, this Misfits Box Set is only about the original band.

Operating as an independent act, with their own record label, The Misfits had tremendous difficulties releasing material, though freedom from the constraints that go hand in hand with better distribution might have been necessary for them be what they were in the first place.  Despite a number of highly productive recording sessions in the 1970s, they didn’t release much of those recordings during their existence as a functional band.  And what they did manage to release was often the more inferior material, looked at in hindsight.  And so this box set is invaluable.  It’s all pretty damn good.  Listening to the whole thing straight through will find you listening to a lot of the same songs over and over again, but hey, even with a lot of repetition they are still good songs!

If you ask me, and if you’ve read this far you are asking (sort-of), the best Misfits recordings were scattered across singles, EPs, the first of their two albums, and vault-clearing compilations like this box set.  Some of the material released prior to this box set hides behind needless echo/reverb.  Some originally unreleased versions of songs benefit from punchier guitar, even if the vocals don’t jump out front-and-center.  And some songs just feel right at certain tempos.  The great thing with this box set is that you can pick the version of each song that feels right for you.  They are all right here (that is, except for the bulk of Walk Among Us which is the only Danzig-era material not on this box set).

If you hear a few Misfits songs and like them, go straight for this box set and save yourself all the trouble of attacking them piecemeal.