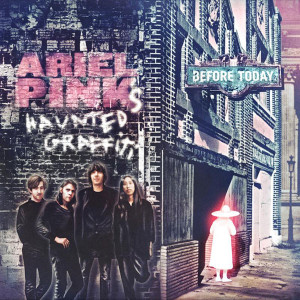 A growing and widespread trend amongst music of the early 21st Century is a tendency to look back at earlier eras, and to the innocence of youth.  At its most grating and shallow, this is represented by many forms of indie “twee” pop.  At its most incisive and nuanced, representatives of the freak folk movement stand out, like early Devendra Banhart and, more significantly, Joanna Newsom.  New strains of “hypnagogic pop” also fit the bill.  Ariel Pink fits in that continuum too.  His music, lo-fi pop he credits to the R. Stevie Moore school, is like a filtered and re-cast version of pop music of the 1960s, 70s and 80s.  For Pink, the “innocence of youth” is about remaining a sort of juvenile delinquent of the highest order, and playing and subverting music that resembles what was popular when he was a child.  Slavoj Žižek, discussing the film The Village, mentions how the story portrays a “desire to recreate a closed universe of authenticity in which innocence is protected from the coercive force of modernity . . . .”  That also could describe the most devolved and conservative visions in music emphasized incessantly by indie twee, while Pink’s motivation is more of an attempt to pour acid on innocent history and corrode it sufficiently to create his own mutant version.  The boldest and most impressive aspect of what Pink does is that his musical sources tend to be the most passé kinds of AM radio fare that would normally provoke a sneer from most listeners, or at least any that consider themselves “hip”.  The earliest Haunted Graffiti albums were solo affairs, recorded on primitive equipment in Pink’s home, complete with human beatbox “percussion”.  Now Pink has a band behind him.  They are the right band.  Without backing away from the warm and fuzzy sound of a 4th generation tape dub, his group adds precision to the melodies that is a major asset.  What this music represents though is a reboot of pop of the preceding decades.  It is as if to say, “it failed before, but this time it might work!”  Music like this says a lot about society, and how on some level there is recognition that we have to go back and undo the mistakes of history while salvaging its successes.