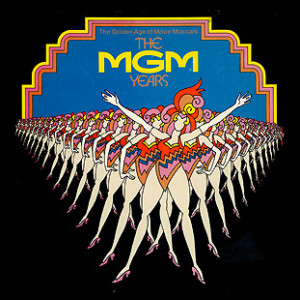 While showtunes and soundtrack music might not be things that I personally enjoy all that much, you can’t go wrong with this set if you want an introduction to those genres.  I really respect what was done here.  From a historical perspective this collection of recordings is amazing.  It features some of the most well-known music of the 20th Century.  People who wouldn’t consider themselves music listeners in the slightest probably still know the melody to “Over the Rainbow” and “Singin’ in the Rain”, or could recognize “Theme from ‘A Summer Place'”.  The common denominator of this music is its simplicity.  In terms of rhythm, nothing here is beyond a remedial level.  The melodies are all straightforward and uncomplicated.  The vocals often lack much subtlety, but instead focus on brute force vibrato.  The instrumental film music on the final two “bonus” discs deals only in broad strokes, with lots of syrupy string arrangements and melodramatic surges.  Despite the enormous popular recognition of this music, it would seem that already most of it is nothing more than an anachronism.  The theatrical and vaudevillian aspects of this stuff — cartoonish, larger-than-life emoting that doesn’t leave any room for a reaction other than the one intended — isn’t all that common outside of Bollywood just a few decades on.  It’s a wonder how tastes change so fast.  I guess that Bollywood comment might make for an interesting comparison: is this music something that is borne out of socioeconomic conditions to fill a gap between the general public’s cultural sophistication and its more rapidly rising disposable income?  At its worst, that is probably exactly what it does.  But here we get some of the best and brightest moments, where there’s something more at work.  “Over the Rainbow” and “Singin’ in the Rain” are so well known because they simply are great songs.  And there are plenty more great songs here.  There was also a book of the same name by Lawrence B. Thomas released just before this LP box set, which might be of interest.  There are no liner notes to speak of with this set, so perhaps the book has more information about the music (I haven’t read it).