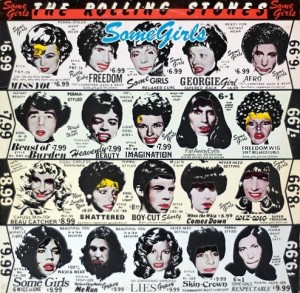 If 1960s music, especially late 60s music, could be summed up in a line, it would be that boundaries were crossed and all possibilities were put on the table.  In the 1970s, the bands and artists that made such strides in the 60s had to do something with the newly socially permissive culture of the West, while tacitly acknowledging that the battles of the 60s for civil rights et al. were not definitively won by the forces of good.  So by the latter part of the 70s, there was a definite slide among more successful rockers towards decadence.  It’s in that milieu that the Stones delivered Some Girls.  It continues the attempts of Black and Blue (their last studio effort) to update the band’s sound, and seem relevant to the disco era, while also playing up a stylistic grab bag.  Unlike that predecessor though, this disc features a much greater amount of songwriting effort.  There are some pretty good tunes here, including the classic “Beast of Burden.”  If anything ties it all together it’s a feeling of weariness and anxiety behind a very jubilant facade.  The band can only barely hold it together.  It’s music for a party that has gone on long enough to see daylight.  But the careless hours of partying haven’t amounted to anything.  In truth, this album is not the great one some make it out to be.  In fact, it’s a little sad in many ways…did really everything the Stones do in the 60s and early 70s lead to this, only this?  Into the 80s, the band, like so many other 60s icons, would start to make music that resigned itself to defeat, that gave up on the promise of their achievements of the 60s.  The contented themselves to rest on the achievements of better days gone by.  But that was a still a few years off.  For the time being, the boys had a little bit of fight left in them, and here you can listen to it burn up and slip away.