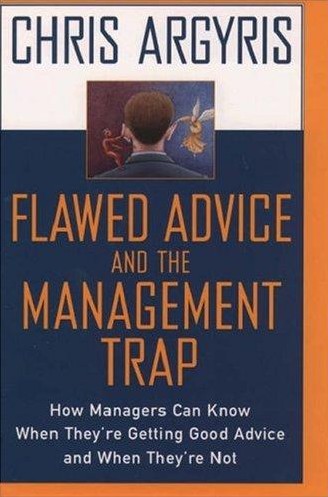 Some good ideas here, but ultimately Argyris falls a bit short. His basic goal is to highlight how many business consulting programs are flawed. He does in fact offer some useful insights and is quite adept at describing some of the “real” problems that businesses face. His strength lies in taking a very psychological approach — it has echoes of the noted French psychiatrist Jaques Lacan. He emphasizes how much behavior of managers is motivated by defensive reactions to avoid embarrassment (what might psychologically be more generally termed “hurt”). Often this produces autocratic responses from managers who seek to impose unilateral control in a counterproductive way and then suppress meaningful discourse on critical topics (often permitting discussion only on what is irrelevant). Argyris’ descriptions fit situations I have witnessed firsthand. Unfortunately, much of this discussion gets mired in unnecessary jargon that is endlessly repeated but never adequately delineated (a glossary or reference table for key terms would help a lot). He does occasionally refer to his past books, but requiring a reader to obtain and read numerous other books in order to understand the current one is not really an acceptable way to write. Moreover, some of his jargon seems to consist of little more than re-labeling of existing concepts (for instance, much of his “theory in use” discussion seems a lot like Alfred Korzybski’s “the map is not the territory” dictum, or sociologist Pierre Bourdieu’s concepts of “habitus” and “a knowledge of the real world that contributes to its reality”). The book makes its key point in saying that other management advice tends to not be actionable or testable. A lot of that “other advice” is well-intentioned and perhaps necessary in the abstract — who can argue with injunctions to be accountable, have courage, and produce results? But, according to Argyris, many of these programs lack the detail to rigorously test unstated assumptions. This is a lot like saying those are necessary but not sufficient factors for success. It’s a more ideological attack on Tom Peters/Jim Collins/Stephen Covey nonsense than books like Phil Rosenzweig’s methodological critique in The Halo Effect (which is actually a much better book overall). Where this book falls very flat is that once he has torn down other approaches, Argyris puts little in its place. Argyris’ examples (often in the form of a transcript with annotations) are often esoteric, leaving the reader wondering about the context for the unexplained titles and roles of the characters, and are most often presented as if self-explanatory while lacking any actionable analysis (the very same flaw he points to in other programs). He discusses a lot of role-playing situations, but never clearly establishes that role-playing is an effective tool (one gets the impression that useful information is withheld from this book in order to encourage companies to instead simply hire the author as a consultant). But it also bears mentioning that Argyris is a strong influence on the bogus “fifth discipline” organizational learning crowd, and so must be viewed with a skeptical eye.

In short, this book highlights some extremely frustrating aspects of corporate and business culture, particularly some of the insufferable lies perpetrated by management seeking to assert (or reassert) unilateral control while feigning to engage in “collaboration” or “teamwork” (the real core of the Peters/Collins/Covey-style programs) that only applies to the lower rungs of a business. He offers useful clues to spotting those flaws. But other than that, this book doesn’t put much on the table as an alternative, so don’t come expecting to find it here. In the end this seems like a rather lightweight overview of a topic that deserves better treatment.

For a critique that offers an entirely different perspective (more academic, less practical — and with a few equally stupid recommendations), try Robert Locke and JC Spender’s Confronting Managerialism which offers a historical perspective on US management contrasted to German and Japanese styles and concludes that much of the problems have to do with balance of power (especially the influence of finance), pay inequality, differences between guilt and shame cultures, and the very concept of “professional management”. For instance, they show how Japanese-style programs (re)imported to the USA are often perversely brought over without some of the necessary foundational elements (like meaningful bottom-up employee empowerment). What I like about Locke and Spender is that they recognize that there is no substitute for intelligence and knowledge of the inner workings of a business and only certain organizational structures (the relatively flat ones like in Silicon Valley) can really make use of that talent, whereas others, it would seem Argyris among them, think (I would say wrongly) that good management can be “learned” in any organization independent from organizational structure. Spender and Locke also make compelling arguments that management, particularly the “MBA culture”, brings a typically unspoken agenda to the table and they do a good job elucidating that hidden agenda (de-skill white collar workers, engage in labor arbitrage, and generally substitute financial for engineering standards). Of course, those guys are not without their own flaws, as they seem to endorse German “christian capitalism” as some kind of solution to something, rather than simply taking a psychological approach and saying that US businesses tend to select and reward sociopathic behavior for ideological reasons. Even Rosabeth Moss Kanter might be another person who has offered better overviews of corporate culture at a high level.