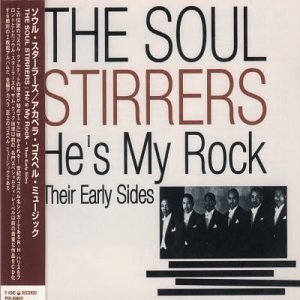 R.H. Harris of The Soul Stirrers was the Louis Armstrong of gospel music.  He is credited by many as being the first significant singer in gospel “quartet” music to break away from the “flatfooted” jubilee style and provide lead vocals that could roam over the top of the backing vocals, simultaneously adding rhythmic syncopation and melodic flourishes.  In other words, he helped create space in gospel music for dynamic soloists just like Armstrong did for jazz.  He, like Armstrong, wasn’t the only person doing his kind of thing, but he did it more effectively and consistently than anyone else.  His style of lead singing opened the door for gospel “quartets” to include more than four singers, with multiple lead vocalists switching back and forth.  And Harris was a force to be reckoned with.  His twangy, slightly nasal voice leaps out and commands attention.  He employed melisma to add an emotional kick to each and every song, but unlike the scores of perhaps unwitting imitators you hear all over the place decades later on American Idol or whatever, there is substance and disciplined restraint when that effect is used here.  It sounds fantastic, and it gets better with each repeated listen.

He’s My Rock may be the most extensive collection of pre-Sam Cooke Soul Stirrers recordings yet assembled.  The material here comes from around 1939 or 1940 through 1948.  The sound is pretty good for transfers from old 78s, and the liner notes are as good as you’ll find, with recording dates and personnel actually listed for everything along with songwriting attribution for most of the selections.  The group sounds great here, and song after song features exquisitely crafted vocal harmonies.  Their attention to detail is extraordinary.  This may be due in part to how late in the Soul Stirrers’ existence these “early” recordings were made.  The Soul Stirrers had been around since the 1920s.  Apart from some Library of Congress recordings, they didn’t really record much until the 1940s.  So don’t be surprised if you hear earlier recordings by other groups–like the Ink Spots–and mistakenly think The Soul Stirrers took influence from them instead of the other way around.  The Soul Stirrers placed so little emphasis on recording for such a long time, that their musical innovations had become well known in some circles long before they recorded any songs reflecting those innovations.  When they finally did make recordings, the material was quite polished and refined.  So it all sounds great.

Even with their many innovations, the early Soul Stirrers were still tied to the long-popular “jubilee” style, and they featured a decidedly slow-paced approach that you could link back to Victorian-era folk music.  Probably due to that fact, listening to a lot of these early recordings together it becomes clear that The Soul Stirrers rarely strayed from demure, homophonic stylings in constructing the backing harmonies.  If you aren’t prepared for that, and expect a more modern sound, like the slightly harder gospel the group recorded later with Sam Cooke, this disc might sound a bit monotonous after a while.  But that shouldn’t detract from the historical importance of these recordings.  It certainly doesn’t take anything away from the fine lead vocals of R.H. Harris.  Despite this collection representing perhaps the most influential vocal group gospel music, it probably isn’t the place to gain an introduction to gospel “quartet” music.  But if you want to understand the development of gospel music, or just enjoy some great vocals, this set is invaluable.