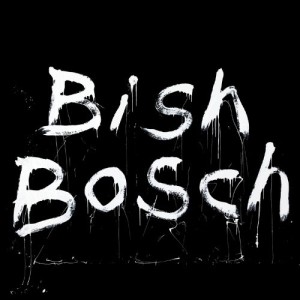 The most amazing feat of Scott Walker’s later career has been to have the most unlikely popular audiences receive it so well.  Since Tilt in 1995 his music has adopted experimental, operatic elements that lack the syncopation that is foundational to pop music of the rock era.  The Drift added an increasingly ominous and dark tone to what already was frighteningly unique music.  With Bish Bosch, Walker is flirting again with syncopation, fitfully at times, but with its programmed drum beats and proto-metal electric guitar it provides a more direct link with (fairly) contemporary pop music than anything he’s released in nearly 30 years.  On top of that he’s able to pull together the resources to have orchestration on an album this “out”.  Yet, he still manages to have his sense of humor felt quite directly.  His previous album The Drift had surreal, absurdist lyrics like “I’ll punch a donkey in the streets of Galway” (“Jolson and Jones”) but Bish Bosch goes for a more heady mix of lowbrow phrasings with lyrics like “I’ve severed my reeking gonads/ Fed them to your shrunken face” (“SDSS1416+13B (Zercon, a Flagpole Sitter)”).  To pull all these elements together in a way that holds together and finds more than scattered audiences at the fringes is no mean feat, and it’s the mark of a master that Walker has done it, again.  There is definitely a brutality in the world of 2012 and Scott Walker seems to have his finger on that pulse in a way that is as unsettling and uncomfortable as the times themselves.  What Bish Bosch reveals, though, is a sense of hidden value in the grotesque, an affirming quality that with a lot of effort–and with the enormous cast of players here, that’s an understatement–people have the power to reclaim the very foundation of the grotesque and create from it a new context.  It’s quite telling that Walker’s approach means an engagement of the highbrow with the lowbrow, and that a gap between those audiences music be bridged.  Granted, he has not won over all listeners, but in a philosophical sense, he’s re-imagining the meaning and possibilities of the path he sets out upon.  It’s not just a different arrangement of the same old elements, but a bold new system of determining what is real and what is illusion.  That is to say that listening to this sort of music can change how to listen to other things, and change your perception of what you have already heard.  It seems the role of philosopher king suits Scott Walker well in his advancing years.