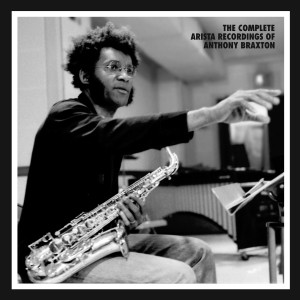 Anthony Braxton has been a major figure in late 20th Century music and beyond.  It’s fitting that his work for Arista Records has finally been comprehensively issued on CD.  Although he recorded for a variety of other labels before, during and since that tenure (notably Leo Records in later years, but even including Windham Hill Records‘ subsidiary Magenta Records), it was his releases for that fledgling major label that earned him international renown.  It has been a minor tragedy that so much of Anthony Braxton’s Arista material has taken so long to see re-release on CD, though it may still be some time before individual releases are available on CD aside from this pricey box set.

Describing Braxton is a difficult task, as his musical interests cover broad territory.  Ostensibly he is and was a “jazz” musician.  But his output on Arista showed early on that he was interested in modern composition wholly separate from the realm of the jazz tradition.  Looking back, his biggest successes from this era were his efforts to cross different styles, chief among them traditional jazz, free jazz, and modern composition.  Yet he stood for something more than just the man behind the curtain churning out the music on his records.  It was “Braxton’s chosen arena of the independent and marginal,” as Michael Heffley’s liner notes to this box put it, that set him apart.  He found ways to make his eclectic interests in smaller pleasures and out-of-the-way innovations work.  And in doing so he helped set a precedent for others to keep alive music that was always something accepted only on the fringes, but was finding noticeably fewer and fewer outlets from the mid-1970s onward.  He managed to redefine the terms for success for a musician in his position without compromising the integrity of his musical ideas.

While it might not be for everyone, given the generally dense and formal nature of much of the music, The Complete Arista Recordings of Anthony Braxton should provide enjoyment and rewards to anyone with at least some interest in modern jazz.  Whatever a potential listener has heard of Braxton’s reputation can be ignored.  In part that’s because these recordings largely pre-date his reputation.  Yet it’s also because things like bright horn charts and marches on Creative Orchestra Music 1976, traditional material like “Maple Leaf Rag” on Duets 1976, the ferocity of improvisation and skill of the players throughout The Montreux / Berlin Concerts, and the boldness of For Two Pianos are all immediately recognizable and enjoyable regardless of a listener’s frame of reference.  There is also a sense that Braxton had a genuine and heartfelt interest in this material, however unusual by mainstream standards, which is at least a little contagious.

This Mosaic Records set does a great job with remastering the music for CD.  If it does have a fault, it’s that it indulges familiar jazz snob peculiarities in the liner notes, which focus on recording information to the general exclusion of release information.  The original liner notes and cover artwork from the albums compiled here are not reproduced, and it is only with considerable effort can tracks on these CDs be matched up with the names of the LPs on which they were originally released.  Nonetheless, this is an excellent set, making a fairly good entry point to Anthony Braxton’s extensive catalog, and should hopefully help preserve this vital music for the future.