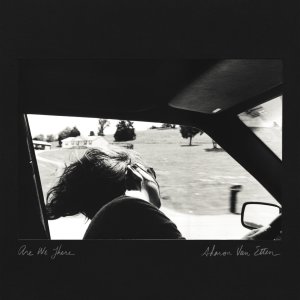 Sharon Van Etten operates mostly in the tradition of singer-songwriters from the 1970s, with vocals a little more breathy and quaking in the style of contemporary indie rock.  Almost all of Are We There is a look at the sadder, more difficult parts of relationships–bad ones mostly.  Where she shines, though, is incorporating a rhythm box and primitive keyboards.  She takes what could be sad sack, mopey music and enlivens it with a patina of making more than expected from sort of stock elements.

One of the best songs is “Our Love.”  Against a slow, monotonous, almost drone-line synthesizer (which could almost pass for “Kip Waits” on the Napoleon Dynamite soundtrack) and a lithe, slick guitar note bent slowly, she sings again and again, “It’s our love” with a faint, warbling voice.  The tension from the juxtaposition of those elements are what make the song.  The lyrics, which are minimal, suggest an abusive relationship. The keyboards suggest monotony.  The heavy vibrato on the vocals suggests tortured emotion.  Yet, the song doesn’t get around to pondering an end or escape.  Instead, it wonders, “Still don’t know what I have found,” then repeating, “In our love.”  It ends repeating the line, “It’s all love.”  What makes the song something other than than a meek submission to abuse is that it ponders, without knowing, what the good parts are mixed in with the bad.  Repeating the same lyrics so many times, with little flourishes of percussion, and slowly changing guitar riffs, subtly makes the point that there is more to the story than what the words explicitly say, and that there is a need to find our own deeper meaning.  That takes an effort.  But the song is fundamentally about making that effort.  It isn’t a cheery song, and maybe the deeper meaning is that what the song conveys was never really “love”.

“Break Me” continues the theme of an abusive relationship.  This is one of the bleaker tunes on the album.  Powerlessness and dependency are recalled with a forceful touch of frustration, and perhaps even bewilderment.  What makes the song listenable, is that it looks at the situation being described in repose, as something already conquered.  Those synthesizers are back, with an ascending two-chord pattern repeating, with a slight addition of another note, then resolving with a middle chord and a higher one.  These ostinato passages clash with washes of cymbal and a drum beat, probably a snare, processed with gated reverb (a kind of echo that doesn’t fully resolve; frequently used in heavy metal records of the late 1980s).

“Tarifa” adds horns.  There is a hint of R&B flavor, and a huskiness to Van Etten’s voice.  Just like a lot of the songs, the theme is again the uncertainty of knowing whether a situation is right: “Tell me when / Tell me when is this over? / Chewed you out / Chew me out when I’m stupid / I don’t wanna / Everyone else pales / Send in the owl / Tell me I’m not a child.”  Unlike “Our Love,” this song tells of someone trying to find confidence, which is to say to connect inner, subjective feeling to some kind of external validation.

It might have helped to have something on the album other than hard looks at romantic relationships.  It fades to black a bit too much for its own good.  The sense of deliberateness, the sort on the percussive chords bashed out repeatedly on the piano on “Your Love is Killing Me” typify it, give this weight but also weigh it down.  There also is too much reliance on the sorts of affected vocalizations that litter indie rock recordings of the day (Josephine Foster comes to mind as a comparison point), and even the kind of aching cries (“You Know Me Well”) that Bono trades in regularly.   Are We There is still better than much in its milieu.  Hopefully Van Etten has more and better things to come.