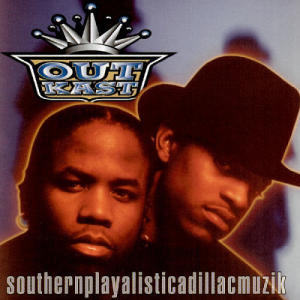 The TV channel VH1 aired a documentary “ATL: The Untold Story of Atlanta’s Rise in the Rap Game.”  At one point there is a clip of OutKast’s André 3000 responding to an unruly, angry crowd at a 1995 hip-hop magazine’s award show booing OutKast, after “East Coast” and “West Coast” rappers had been feuding throughout the entire event, by saying, “The South got something to say!”  (Here, remember that at that very award show OutKast also asked for open-mindedness, listening to what any original MC had to say…).  The tone of the documentary was that Atlanta hip-hop musicians felt neglected as media focus was exclusively on New York City and Los Angeles.  But the problem with putting André 3000’s declaration in this context is that it makes it hardly more than an arbitrary statement of chauvinism.  Did the Midwest, the Southwest or the Northwest not have something to say too?  This reveals an important insight into the dead-end aspirations embedded in a lot of hip hop in the 1990s.  The goal wasn’t some kind of fundamental equality.  It wasn’t like this was a noble fight so that everybody, no matter their origins, could have a chance. Instead it was just a narrow battle to put Atlanta, alone, at, or maybe even above, the level of New York City or Los Angeles.  It was about a distinct “Atlanta” identity having some kind of precedence over other identities.  This represents the narrowest possible expansion.  It is sort of a defense of the status quo, with just one specific fiefdom added to the inner circle of nobility in the largely patriarchal estates of the hip-hop realm

Southernplayalisticadillacmuzik starts strong, but runs out its welcome a bit as it goes on.  The rapping is, really, nothing too special.  The lyrics are all about players/playas, which is to say they are about the bravura of young men angling to achieve “alpha male” status.  They render that mindset well.  By adopting a slightly ironic distance from some of it (“Ain’t No Thang”), though, OutKast allow themselves to perpetuate the sorts of misogynistic, materialistic claptrap that they occasionally poke fun of, yet always seem to be preoccupied with (“Player’s Ball (Original)”).  It could just be a youthful mistake.  As much as this album is suppose to announce the arrival of a unique southern style of hip-hop, it mostly recalls New York boom-bap and early 1990s East Coast gangsta rap.  Yes, the tempos are a little slower, the bass is a little heavier and more insistent, and the overall vibe is a little more laid-back.  Also, the music has more melodicism in the raps than most hip-hop at the time.  It remains just a slight variation on the basic template of hip-hop from elsewhere.  While Outkast tried to rise above the confines of mainstream hip-hop, their earliest music couldn’t.  It tripped up by being just the same old gangsta hip-hop with a less aggressive posture.  They didn’t really have a new objective.  All they had was another horse in the same old race.  Maybe they wanted this music to be more than that, but they don’t always get there.  They bring it on a few tunes, but there is plenty of ho-hum filler too.  After a while the album gives way to what sounds more like third-tier R&B than hip-hop as such.  At that point it becomes quite tiresome.

The big stars here are the producers, Organized Noize.  The rappers, Big Boi and André 3000, seem like they are along for the ride.  They are up for it, but they don’t really seem like they are driving the procession.  That would come a few years later.  They were still kids.  Much of what they started here was more compellingly delivered on Aquemini (1998), and then they went in really new directions with Stankonia (2000).  But, really, it seems like OutKast wouldn’t have become what they did without first setting off in the direction they took here, then exhausting the need to push a “player” identity and instead making music that spoke to everyone on a new level.