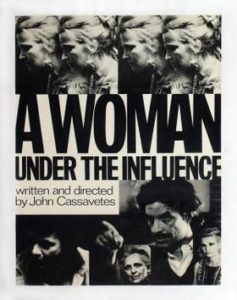 John Cassavetes’ wife Gena Rowlands asked him to write a play with an interesting female character for her to perform.  That play ended up being unsuitable for live theatrical performance and was instead re-purposed as the film A Woman Under the Influence.  Rowlands plays Mabel Longhetti, a stay-at-home mother of three children.  Her mental disposition is one that is inconvenient to modern society (there being no objective definition of a “normal” mental state).  Her husband Nick (Falk) is a working class construction worker.  Nick is a rather angry and occasionally violent doofus who genuinely cares for Mabel.  The film examines the reactions of ordinary people to Mabel’s unconventional behavior, and Nick’s attempts to cope with it — and to try to control it (and her).  Mabel’s eccentricities eventually lead to her being committed to a mental hospital for six months — of note, Nick’s violent outbursts at home and work do not lead to him being committed or imprisoned.  Nick proves inept but well-meaning as a sole parent during Mabel’s absence.  The film concludes with an extended portrait of Mabel’s return home from the hospital.  Nick planned a welcome home party, though the presence of a crowd is questioned by his mother (Katherine Cassavetes) as being too stressful for Mabel.  As the guests eventually are thrown out by Nick’s mother and then Nick, Mabel clumsily attempts suicide, and her children become distraught.  In a fitting conclusion echoing the ancient myth of Sisyphus, Nick carries his children upstairs to their bedroom only to have them run back downstairs to their mother and the process repeats.  Such a “punishment” is fitting for Nick, as a self-aggrandizing jerk whose children seem more genuinely connected to their mother as a person with her own free will than he does.

A Woman Under the Influence is one of the “mature” Cassavetes films, in which his style that blends intense scripted and improvised acting expands upon what he had done in earlier films like Faces and Husbands, notably improving upon the overall pacing, while also deploying a much less conventional narrative structure than Minnie and Moskowitz.  Rowlands and Falk give tremendous performances.  Cassavetes’ narrative examines the characters’ personal situations from a sympathetic perspective, with his iconoclastic film techniques offering a much deeper palette of complex emotions than is typical in movies.  What sets A Woman Under the Influence apart from Faces is that, here, a couple is struggling to keep their family together, whereas Faces saw characters striving to break free of social constraints (while ironically and cynically doing so to seek social validation).  The two main characters are each unusual for feature length films, in that middle aged, working class protagonists are usually portrayed only at the margins of Hollywood cinema and the industrial nature of film production prices out most would-be independent ventures that might otherwise show interest.

These characters are all flawed, but worthy of human dignity nonetheless.  Nick’s struggle to control the people and situations around him — and his frequent inability to do so — is his most pronounced character flaw.  Mabel is less a “flawed” character as much as one with a combination of inability and unwillingness to conform to social expectations.  Cassavetes’ movies often featured a free-spirit “hippie” character (often played by Seymour Cassel).  The Mabel character is sort of a twist on that theme.  This prompts frequently draconian reactions.  Mabel’s commitment might be compared to the real-life story of the feminist scholar Kate Millett.  This is the “hysterical woman” motif:

“Remember what hysteria is? To simplify it, from a psychoanalytic standpoint, society confers on you a certain identity. You are a teacher, professor, woman, mother, feminist, whatever. The basic hysterical gesture is to raise a question and doubt your identity. ‘You’re saying I’m this, but why am I this? What makes me this?’ Feminism begins with this hysterical question. Male patriarchal ideology constrains women to a certain position and identity, and you begin to ask, ‘But am I really that?’ Or to use the old Juliet question from Romeo and Juliet, ‘Am I that name?’ Like, ‘Why am I that?’ So hysteria is this basic doubting of your identity.”

The sympathy that Cassavetes shows his flawed characters is unique.  Unlike, say, Pier Paolo Passolini‘s underclass protagonists, like the titular character in Accatone, Cassavetes’s films often deal with characters situated away from class conflicts.  The Longhetti family is working class, but we see them with a comfortable home and steadily employed without obvious want.  This allows for a unique focus on the characters’ inner psychology, in which viewers can witness the characters questioning their own actions and pursuing changes in their lives while at the same time struggling to make the right changes and repeatedly failing to actually change their desires as reflected in their actions.  While certainly many other filmmakers relied on psychology to inform their work, Cassavetes was unique in the raw, harsh and almost bleak realism with which he depicted these things.  His films are largely free of simplistic symbolism.  Surprisingly, it is an approach that shared some similarities with some films of the Socialist Realism genre, such as Béla Tarr‘s early short Hotel Magnezit, albeit with the freedom to explore subjects other than a critique of bureaucracy.

In the end, A Woman Under the Influence remains a “difficult” film filled with enough heart to remain engaging from beginning to end.  This is another landmark of American cinema from one of its greatest writer/directors. 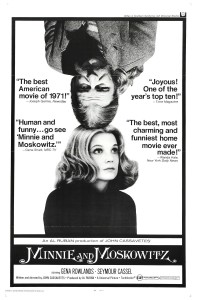 Cassavetes’ Minnie and Moskowitz is the story of a couple’s oddball romance.  The basic plot is adapted from that of Marty (1955).  But Cassavetes puts a wider social chasm between the two main characters.  Seymour Moskowitz (Seymour Cassel) is a sub-proletariat hippie who works as a car park attendant, whose mother sees him as a hopeless case with a downward trajectory in life.  Minnie Moore (Gena Rowlands) is a museum curator who rubs shoulders with wealthy art aficionados, though she comes from a middle class background.  Despite characteristically uncomfortable scenes and intensely raw acting, this is Cassavetes at his most conventional and accessible.  Yet this film succeeds on multiple levels, not just as a light comedy/drama.  The main characters have a tumultuous relationship.  There is nothing easy about them coming together.  They have plenty of inhibitions, brought on by the stress and fears and discrimination and loneliness and limitations of their individual lives.  It is hard for them to let go of those things, however much misery those things bring them.  And the people around them are mostly selfish and rude, or just unable or willing to open up to others.  Minnie, in particular, has a hard time accepting Seymour, because she is part of a much higher social strata that tends to sneer at the likes of him.  Her real-life husband Cassavetes plays her (ex) boyfriend Jim, a married man who won’t leave his wife.  She is surrounded by people who seem only interested in how she fits into plays for status — Jim with his stable of women or a blind date (Val Avery) trying to be less of a sad sack without a wife like a successful guy like him “should” have.

But the real heart of the film is that the tumult and conflict all serves to bring two people together.  Their relationship is a choice, and they choose to transcend the many, many obstacles put in its way.  The sweetness of Minnie and Moskowitz is that it is a romance tale that suggests social inequities can be overcome, and that relationships can play a part in making the world a more accepting place.  This is what distinguishes it from Marty, which is a wonderful movie with superb acting but one that relies upon the (essentialist) idea of characters settling for something and discovering what they “really” are and “really” want.  Cassavetes’ film is about the characters becoming something more than what they were at the start.  That is especially true for Moskowitz, who goes from being someone drifting along on nothing more than simple pleasures to having a larger purpose.  This may not be Cassavetes’ best or most ambitious work, but it is one of his most likable films.