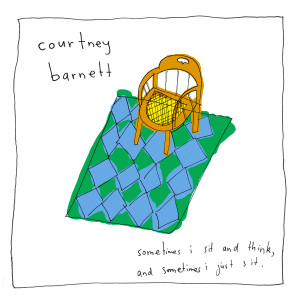 Courtney Barnett’s first full-length album trades in some of the dense yet laconic wordplay of her first two EPs for more refined guitar sounds.  This is definitely a fuller, more developed production than here earliest recordings.  The rhythms are crisp and everything is in tune.  The trade may take away some of the quirky charm, but it makes up most of that ground with assured rock textures.

Barnett has long worked with a kind of pastiche of old alt rock styles, everything from underground rock of the early 1970s (The Velvet Underground‘s Loaded), to witty underclass poetry with almost incongruously contemporary pop-rock backing (Ian Dury & the Blockheads’ New Boots & Panties!!), to slacker punk (her song “Avant Gardener” from How to Carve a Carrot Into a Rose, with its deadpan vocals, is a dead ringer for “You’re Gonna Watch Me” by the short-live Cleveland punk band Pressler-Morgan One Plus One).  This album, though, is less a grab bag of influences worn on her sleeve than an integration of influences into a more streamlined package.  Take that as you will.  She’s consolidating what has been done before, expanding it to fit her purposes.  Is it wrong to say she’s domesticating this stuff?  Probably!  Anyway, she takes the counter-culture and kind of makes it seem lived-in, and roomy enough to accommodate just about anyone, in a low-pressure kind of way — the sonic equivalent of going to a friend’s place (but not your best friend’s place) and “crashing on the couch.”  This probably won’t knock anyone over, but it may just grow on you if it doesn’t seem immediately appealing.