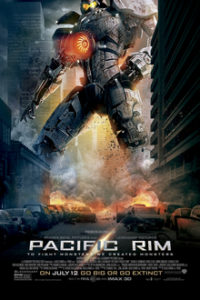 First, a brief summary of the plot of Pacific Rim.  Aliens have genetically engineered kaiju (Godzilla-like monsters) that they send to Earth through an intergalactic portal (the “Breach”) that opens at the bottom of the Pacific Ocean, in order to destroy human civilization and eventually conquer the planet.  Humanoid robots called jaegers are built to fight the kaiju.  The kaiju become larger and appear more frequently over time.  Eventually, humans realize the aliens’ plans and figure out a way to detonate a nuclear bomb in the portal in order to collapse it, saving humans from the aliens.  Most of the film revolves around amazing special effects used to create action-packed fight scenes between robots and monsters.  But what is most interesting — to me at least — is the backdrop against which the robots and monsters fights take place.

Impotence of government – The film’s plot is heavily dependent on a view of the impotence of government.  The first kaiju attack is described (but barely shown on screen) as having taken conventional military forces six days to win, leaving extensive devastation.  The idea that the government (and its military) is unable to act to stop the kaiju is a theme carried throughout the film.  The jaegers are created as an official (multi-)government program, but after one jaeger is severely damaged in a battle with a kaiju, world governments disband the program and instead build protective walls (the jaeger program is then carried on by some sort of independent [private] organization whose funding and organizational structure is never explained).  The walls turn out to be easily breached.  In response, world governments take no action whatsoever.  In other words, governments throw up their hands and apparently decide that the kaiju should win!

Individualism – Most of the film dwells on individual action, and valorizes the motif of “great individuals”.  The jaeger pilots are all hot-shot “cowboys”, just like, say, Tom Cruise‘s “Maverick” pilot character in the film Top Gun (1986).  As governmental impotence provides no response to the kaiju threat, the fate of humanity is left in the hands of these “cowboys”.  Although there are many individuals that take part in the jaeger program, the film presents them less as a team than as an ad hoc assemblage of individuals.  This stands in marked contrast to Shin Godzilla (2016), which reacts to a similar program of governmental impotence in the face of a monster attack with an explicitly team-based response.  And, of course, the film pays almost no attention to collateral damage to civilians.  In a way, all this reflects filmmaker David Lynch‘s comments about how President Donald Trump — even if Trump fails to do a good job himself — creates an aura of disruptive greatness that reveals the ineffectual nature of opposition politicians who can’t get anything done.

Destructive industrial growth – The film never entertains any notion of peaceful negotiations with the aliens sending the kaiju through the Breach, some kind of barricade right at the outlet of the Breach, or even permanent depopulation/dispersion of large urban coastal cities.  Humanity focuses instead on building giant robots — their humanoid configuration serving no clear purpose — and a coastal wall — which is so obviously inadequate to the task and so burdensome to normal human activities.  There is a casual acceptance of industrial growth, and not any palpable concern about its consequences or any alternatives.

The film as a whole is strangely entertaining.  That is partly due to the special effects and extensive use of action scenes, but also due to the preposterously comical interactions between the characters, not a single one of which is realistic.