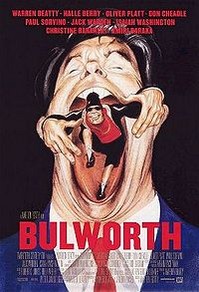 There are two political films from the 1990s that took on added intrigue around the 2016 U.S. Presidential Election: Bob Roberts and Bulworth.

In Bob Roberts, Tim Robbins provides a realistic satire of a right-wing populist running for political office.  The film seeks to skewer the hypocrisy and rapacious aims of such a candidate.  Looking back on the film in 2017, there are many resemblances (and some differences) with the successful candidacy of President Donald Trump.  But Robbins’ sanctimonious liberal critique does get a little tedious, and for all the complaining the film does it stops well short of offering any sort of meaningful alternative.

Bulworth came along a few years later.  It was the work of writer/director/star Warren Beatty.  Beatty is kind of an old Hollywood icon, known for his egotistical preening.  But perhaps more than any other such big, preening Hollywood star, he repeatedly made films with some sort of connection to leftist politics.  In Bulworth, Beatty plays incumbent U.S. Senator Jay Billington Bulworth from California, who is running for reelection.  Early on, the film reveals him to be a kind of apostate leftist, whose office has photos of Malcolm X, Martin Luther King, Jr., etc.  He is now a corrupt Washington insider, doing the bidding of big business campaign funders to sustain his reelection campaign and coddle his estranged family members.  He gets an insurance company lobbyist to give him a big life insurance policy in exchange (i.e., as a bribe) for stalling some insurance regulations in legislative committee.  Beatty’s character then hires a hit man to have himself killed.  But he has a change of heart, and over the course of the next few days goes around suddenly speaking bluntly and honestly about corruption in Washington and sensible left-leaning social policies.  Amiri Baraka makes a cameo as a homeless man shouting advice to Beatty’s character, which Beatty’s character then applies by starting to deliver speeches and interviews as hip-hop raps — Beatty does a superb job making these raps as awkward as they are enlightening.  Much of the film relies on zany comedy bits, reminiscent of another Beatty film from a decade prior, Ishtar.  Almost all of the characters and many broad plot points are contrived and unrealistic — the polar opposite of Robbins’ mockumentary Bob Roberts.  The characters are especially one-dimensional for the most part.  But the characters and broad plot points are really just pretexts for Beatty’s Jay Billington Bulworth to suddenly speak sensibly in individual scenes, highlighting how that doesn’t seem to happen in contemporary “real life”.  What, exactly, does he talk about?:  corrupt campaign financing, lack of journalistic integrity, the need for socialized health care, the need for corporate regulation, the decimation of manufacturing jobs, outsourcing, exploitation of the third world to extract natural resources, the hypocrisy and deceptions of the Democratic Party, etc.  Most if not all of what he says became the platform of Bernie Sanders in the 2016 Democratic Presidential Primary.  In the film, Bulworth’s hip-hop rants gain him enormous popularity, even as party insiders and big business insiders try to contain or repudiate him.  At the time the film came out, the realism of those portrayals might have been questioned.  Would such a candidate really be popular?  The Sanders primary campaign and its aftermath demonstrated the underlying realism.  A candidate standing for such things (minus the hip-hop flamboyance) would be enormously popular.  That is why the establishment and big business always seeks to prevent such a candidate from ever being treated as viable.  The contrived part of Bulworth requiring the audience’s suspension of disbelief is that an incumbent politician from the establishment, with a history of big business collaboration, would suddenly shift back to the political left, thereby being inherently “viable” (and setting aside all so-called “third party” campaigns of this sort, like those of Henry Wallace and Teddy Roosevelt).  But this plot contrivance is no more a problem than Jimmy Stewart‘s character getting appointed to the senate in Mr. Smith Goes to Washington.

Another interesting this to consider about this film is the way that Beatty suggests a left-leaning candidate could gain popularity through sensational and outrageous public acts.  Could it be that he got the idea based on what he experienced as part of filming Madonna: Truth or Dare? Beatty was dating pop singer Madonna around the time she filmed the behind-the-scenes documentary.  Beatty appeared in it as kind of an out-of-touch old timer.  Is Bulworth his answer to how an old timer can use vaguely Madonna-like spectacle to put forward a left-leaning political platform?

Bulworth is also somewhat a historical curiosity.  Released in 1998, just before the Glass-Steagall Legislation was repealed to put Wall Street corruption on steroids, Beatty does not spend any time railing against financialization or predatory banking/finance in general — of the sort that would come to dominate American society for the next two decades.  There is also nothing said about environmental destruction.  And, much like the real-life Bernie Sanders, Beatty’s character also spends relatively little attention to imperialist wars (though Saddam Hussein gets mentioned).  He does talk-up the anti-capitalist Black Panthers a bit — Bernie Sanders never did that.

One thing the film does have going for it is that the zany escapades of Mr. Bulworth take place over a few sleep-deprived nights, kind of like a “lost weekend” sort of scenario.  In a time just before the Internet sped up the pace of news reporting (and the dissemination of gossip), there is slightly more believeability that the senator could have gone along for a while as he did.

The ending of the film is unintentionally anti-climactic.  However, there is something to be said about parallels to the real-life fates of most left-leaning politicians.

Bulworth may not be a great film, but it is a good one.  It seems to have held up beyond its immediate time period, which is more than most political-themed films can say.